No, Indonesia has not announced that it will ban some online video games

A photograph that has been shared thousands of times on Facebook shows a purported announcement from Indonesia’s Ministry of Communication banning ten “violent” online video games. The ministry has issued a statement saying the claim is not true and that there is no such ban.

The misleading photograph has been posted by numerous Facebook accounts, for example here where it has been shared nearly 4,000 times since it was published January 5, 2019. 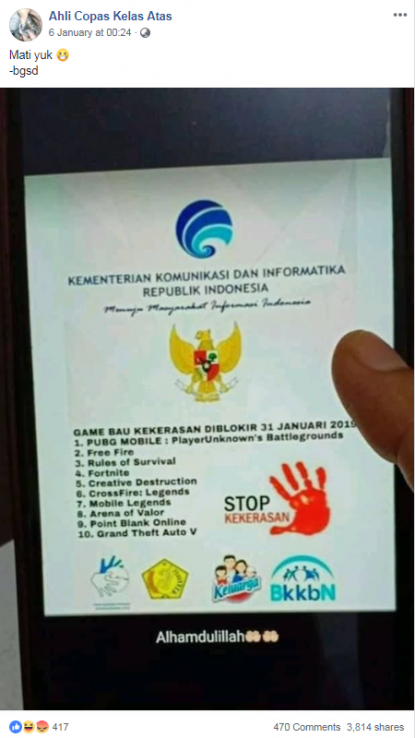 The photograph shows what appears to be an official communication from the Indonesia's Ministry of Communication and Information, with the ministry’s logo on the top of the page.

The text on the purported announcement says in Indonesian: “These violent games will be blocked starting from January 31, 2019” alongside a list of ten online games, including popular online battle royale game Fortnite and Mobile Legends.

Indonesia’s Ministry of Communication issued a statement January 10, 2019 saying that the report of a video game ban was untrue. 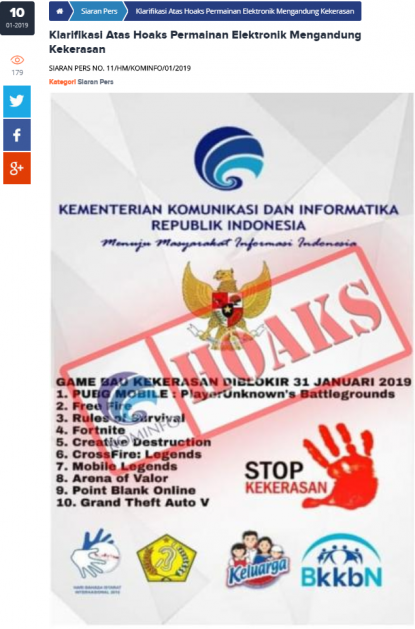 Screenshot of the ministry's statement

“The Communication and Information Ministry wants to make it clear that the information is untrue, or can also be said to be a hoax,” the online statement said.

The information ministry’s website and official Facebook page also have no record of it making such a statement.

Claims that the Indonesian government is planning to ban video games have previously circulated online, for example, AFP fact-checked a similar claim in July 2018, which can be seen here.