No, French President Macron did not call Biafra ‘the hope of West Africa’

An article shared more than 1,500 times on Facebook claims French President Emmanuel Macron has pledged support on Twitter for a Biafran state separate from Nigeria, calling Biafra “the hope of West Africa”. This is false. Macron made no such comments on Twitter or via any other platform.

The article, posted on a website called The Pointer News on December 29, 2018, claimed that Macron called on African leaders to support Biafran independence. The comments were supposed to have been made in a tweet posted on Tuesday December 25. “All Africa leaders should rises to their responsibility, to ensure Biafra stood as a nation, before it get out of hand," the post quoted Macron as saying. 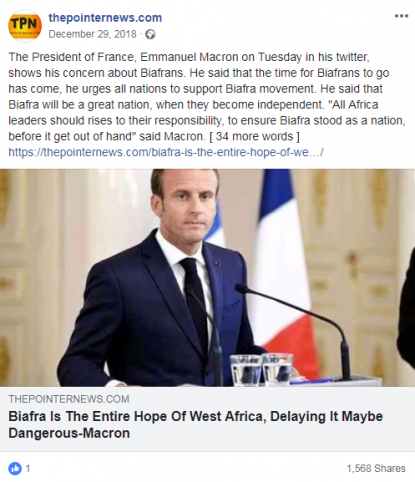 A screenshot take on February 28, showing a post that claims Macron said Biafra is the hope of West Africa

A unilateral declaration of an independent republic of Biafra for the Igbo people who dominate southeast Nigeria was made in 1967, sparking a brutal civil war with federal forces that lasted 30 months.

In all, more than one million people died from the effects of conflict, starvation and disease, most of them Igbos.

The Biafran side was led by Colonel Chukwuemeka Odumegwu Ojukwu, who would later flee to Ivory Coast, a former French colony, after the war. France was one of the few countries to back the fledgling republic of Biafra.

More than 50 years after the civil war started, Nnamdi Kanu, a British-Nigerian political activist and former London estate agent, seized on latent secessionist sentiment in the southeast as head of a movement called the Independent People of Biafra (IPOB) and resurrected calls for an Igbo nation.

The post by The Pointer News claims that Macron is endorsing Biafra’s bid to secede from Nigeria.

But AFP found no tweet in December or at any other date in which the current French head of state shows support for Biafran separatism. The only tweet put out by Macron’s official account on December 25 was a Christmas greeting from him and his wife, Brigitte.

“Brigitte joins me in wishing a Merry Christmas to all of you,” Macron tweeted.

The French foreign ministry in Paris told AFP that the president made no such comments, on or off social media.

"We vigorously deny these remarks attributed to President Macron. There has been no tweet or comment on his part on this subject," the ministry said.

President Muhammadu Buhari has declared IPOB a terrorist organisation and its leader -- who has resurfaced in Israel and Britain in recent months -- is on trial in Nigeria for treason.

Facebook posts widely shared among pro-Biafra groups also claimed that US President Donald Trump made comments about the group at the United Nations. AFP checked and found it was false; Trump made no mention of IPOB or Biafra.