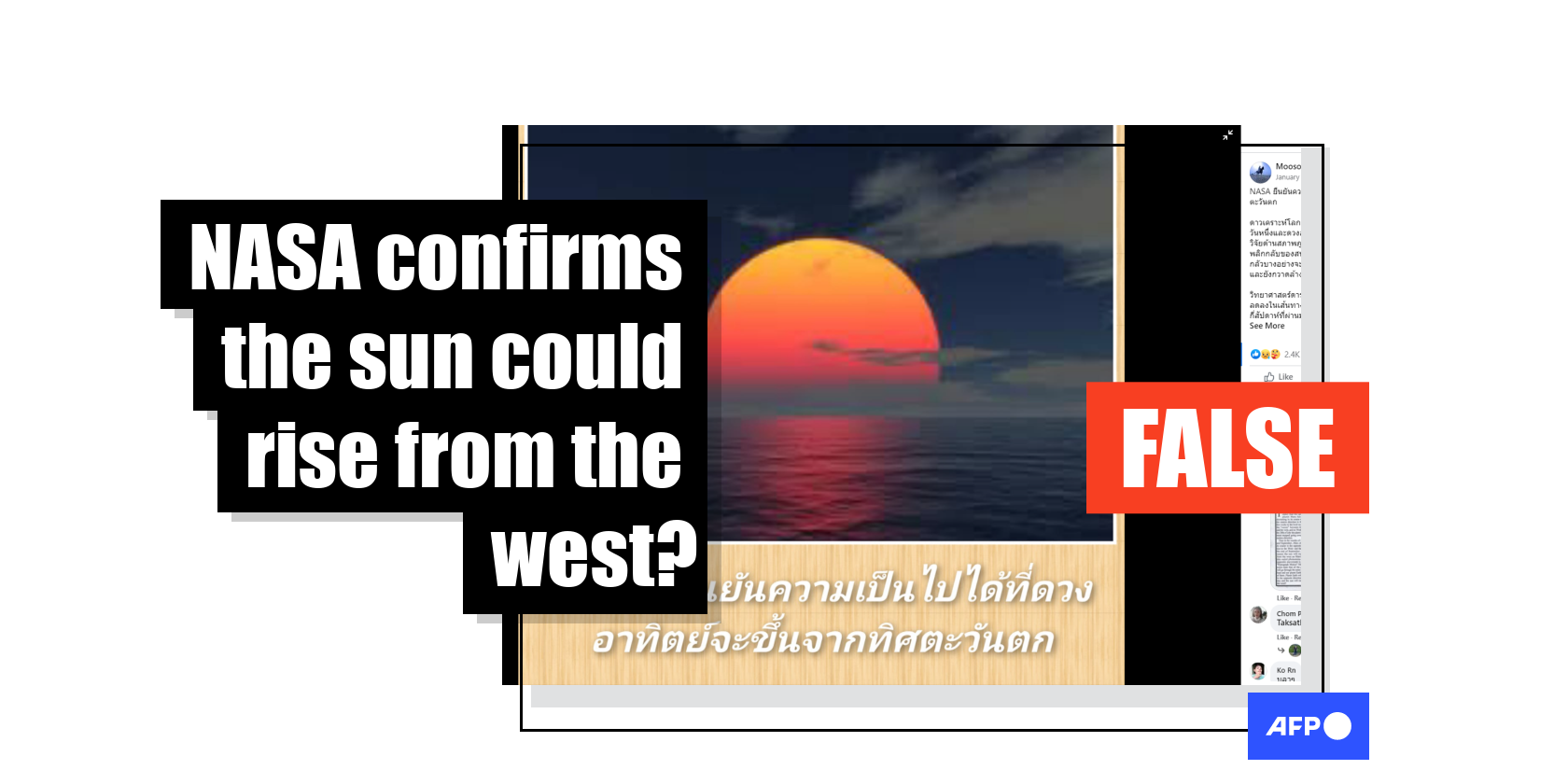 Facebook posts shared thousands of times claim that US space agency NASA announced the possibility of the sun rising from the west, which is caused by the earth spinning in the opposite direction and is a sign that doomsday is approaching. Contacted by AFP, NASA said the claim was false.

The photo has been circulating in multiple Facebook posts, including here where it has been shared more than 15,000 times since January 14, 2021. 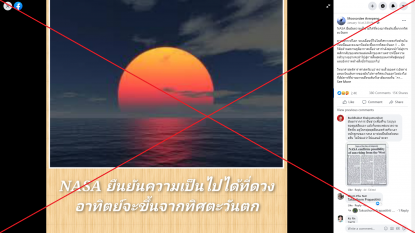 The photo shows the sun rising over the ocean. “NASA confirms the possibility of the sun rising from the west,” the Thai-language text superimposed on the picture reads.

“NASA confirms the possibility of the sun rising from the west.
The earth is spinning in the opposite direction which causes the sun to rise from the west side!!” the caption reads.

“Researchers believe that we are moving towards the reverse of the magnetic field which will lead us to the end of humanity and the approaching of doomsday.”

The similar claim in Thai has also been shared here, here and here in recent weeks. It has previously circulated in English here in 2020 and here in 2010. The claim has even become the basis for a Facebook page.

Contacted by AFP, NASA said the claim about the sun rising from the west is “false”.

“Neither NASA or any other scientific organisation is predicting the sun will rise in the west, Bettina Inclán, an Associate Administrator for Communications of NASA said via email on February 20, 2019.

“Magnetic pole reversal is a real phenomenon that has happened many times in the past, and scientists worldwide study it, but a reversal leading to the Earth spinning in the opposite direction to cause the Sun to rise in the west is false.”

She said NASA and other scientific organisations are “too often the target of false news and science claims”, adding: “This latest hoax is similar to other doomsday predictions that come and go.”

NASA published an explanatory article on December 1, 2011 about the phenomenon of the Earth's magnetic field reversal, titled “2012: Magnetic Pole Reversal Happens All The (Geologic) Time” indicating that this phenomenon has occurred several times over the past thousands of years, and it is a “rule, not an exception”.

The article described the phenomenon: “Unlike a classic bar magnet, or the decorative magnets on your refrigerator, the matter governing Earth's magnetic field moves around,” stressing that “there is nothing in the millions of years of geologic record to suggest that any of the 2012 doomsday scenarios connected to a pole reversal should be taken seriously.”

NASA also published an article titled “Why does the Sun rise in the east and set in the west?”

“Earth rotates or spins toward the east, and that's why the Sun, Moon, planets, and stars all rise in the east and make their way westward across the sky.”