Optimistic tweet on the state of biodiversity peddles misleading figures

A tweet shared thousands of times over the past two weeks suggests that koala, whale, and polar bear populations are thriving, and that extinctions are on the decline overall, citing the International Union for Conservation of Nature (IUCN) as a source. This is misleading; koalas are considered a vulnerable population by the IUCN, overall whale and polar bear populations are not thriving despite certain healthy subspopulations, and the IUCN told AFP extinctions are not down.

“Polar bears have increased 400% in 45 yrs. Whales are nearly fully recovered. Extinctions are down 90% past century (IUCN). Koalas doing fine.” This optimistic take on the current state of the world’s biodiversity was shared more than 5,000 times on Twitter, as well as on Facebook as a screenshot. 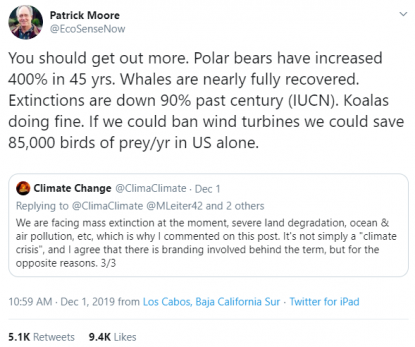 The tweet was published Dr. Patrick Moore, an early member of Greenpeace. He was once listed as a founding member for the environmental organization but has since been repudiated by the group which states that Moore usually takes “positions that Greenpeace opposes." .

Moore currently serves on the Board of Directors for the CO2 Coalition, a US based lobby group which says it seeks to educate lawmakers and the public “about the important contribution made by carbon dioxide to our lives and the economy.”

However, the tweet is misleading, according to experts interviewed by AFP.

“The number of people having an interest in spreading misinformation about the status of polar bears is surprisingly high, and a source of despair for us working in the area,” Dag Vongraven, a senior adviser at the Norwegian Polar Institute and co-chair of the IUCN Polar Bear Specialist Group (PBSG), told AFP in an email.

Of the 19 polar bear subpopulations around the globe, only two had population estimates prior to 1980. The first wide-ranging estimate was the PBSG’s first status table, published in 1993. Even then, Vongraven pointed out, “We have little or no knowledge of polar bears in half the area where the species exists,” due to lack of data for Russia, the Polar Basin and large parts of Greenland. A polar bear is seen on Griffith Island, in the Canadian High Arctic on September 25, 2015 (AFP / Clement Sabourin)

Data from the last two decades shows that two subpopulations of polar bears have likely increased, four have likely declined, five are likely stable, and the rest are data deficient.

Studies, including this one from 2016, predict that sea ice loss in the Arctic will lead to declines in polar bear numbers in the future as their habitat shrink.

The statement that “whales are nearly recovered,” does not reflect reality, according to Robert Michaud, president of the Group for Research and Education on Marine Mammals, a Quebec non-profit dedicated to scientific research and education for marine conservation.

Michaud told AFP that whale population estimates are nuanced and vary not only across subspecies but also within subspecies in different parts of the world’s oceans. Picture of a humpback whale taken off the coast of Puerto Lopez, Manabi, in Ecuador on October 21, 2015 (AFP / Rodrigo Buendia)

“There are 400 black whales in the Atlantic, so they are on the verge of extinction. Meanwhile, all fin whales populations from Antarctica to the Arctic are doing very well,” Michaud told AFP. “But if we were to take the pulse of all whales and the threats to their lives, we could not say that they are doing well,” he concluded.

The International Whaling Commission (IWC), an international agency that regulates commercial whaling to ensure conservation of whale stocks, assesses whale status by population rather than by species. Their numbers are available here, although the group’s website warns that their figures are a “best estimate.”

The IWC website states that although the recovery of some whale populations is a major conservation success, “This is certainly not the case for all, and some populations remain critically endangered.” They cite accidental bycatch in fishing nets, collision with ships, ocean noise and other forms of habitat degradation as the main threats to whales.

The IUCN Red List of Threatened Species is one of the most exhaustive biodiversity population compilations, and is used as a reference by many.

Moore’s tweet presents the 90 percent decrease in extinctions in the last century as an IUCN figure. However, Craig Hilton-Taylor, head of the IUCN Red List, told AFP in an email, “There is no evidence that the number of extinctions is slowing, the reverse is in fact true.”

Hilton-Taylor provided AFP with a graph (see below) produced for the Intergovernmental Science-Policy Platform on Biodiversity and Ecosystem Services (IPBES), which aims to provide guidance for leaders making policy on biodiversity. It uses IUCN Red List data on extinctions worldwide, and shows a continuous increase starting around the time of the Industrial Revolution. Screenshot taken on December 17, 2019 of a graph based on IUCN Red List data

Koalas threatened, no consensus on population

The tweet also makes the sweeping claim that “koalas are doing fine.” Although the organizations contacted by AFP do not agree on their numbers, neither agreed with Moore’s assessment of the marsupial’s status.

“The Koala is not doing fine, that is why it is listed as vulnerable. Numbers have been declining and are projected to continue to do so,” Craig Hilton-Taylor told AFP. 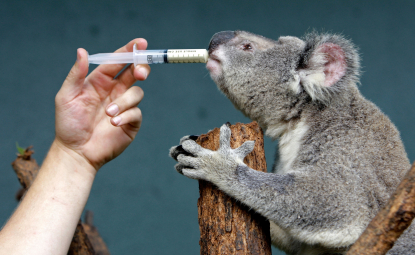 The IUCN Red List estimates that there are 300,000 mature individuals, and that the population is decreasing, citing drought, tree deaths and habitat fragmentation caused by vegetation clearance as the main factors for the decrease.

The Australian Koala Foundation (AKF), a nonprofit dedicated to koala conservation, contests the IUCN numbers and suggests that there are fewer than 100,000 koalas in Australia. The results of the foundation’s research can be found on Bob’s Map, named after a past chairman of the AKF.

“AKF does not believe they are doing just fine,” Deborah Tabart, current chairman of the AKF, told AFP in an email.

Koalas have been legally listed as vulnerable under the Environment Protection and Biodiversity Conservation Act, Australia’s main environmental piece of legislation, since April 2012.

Windmills are a large source of mortality for birds, but various studies on the topic provide different numbers. One 2013 study cited by the US Fish and Wildlife service estimated that collisions with land-based wind turbines killed an average of 234,012 birds per year in the US.

The largest threat to birds by far was cats, who kill an average of 2.4 billion birds every year.