A map of Australia that purports to show the proportion of land owned by China has been shared thousands of times in multiple posts on Facebook and Twitter. The posts claim that there are only a "few farms and public utilities still left" in Australia, as the government has sold significant portions of land to China. The claim is false; China only held 2.3 percent of agricultural land in Australia according to the Australian government's most recent records; just 13.4 percent of Australia's agricultural land had "a level of foreign interest" in 2017-18 and 80 percent of this was on a leasehold basis, ruling out complete ownership.

This Facebook post includes a map of Australia which purports to show how much land is Chinese-owned. It has been shared more than 7,100 times. The text around the map reads: “FOR SALE AUSTRALIA. ATTENTION WORLD! There are a few FARMS and PUBLIC UTILITIES still left so YOU BETTER BE QUICK!”

The text above the map states: "Look and weep...you cannot buy land in China only lease. Our zoos can't even own Pandas...all pandas are leased by zoos and must return to China every 4 to 5 years. Yet our traitorous governments of both persuasions sell off our COUNTRY to our biggest economic threat...China! Wake up Australia before it's too LATE!!"

The claim is false; the map significantly overstates the proportion of Australian farmland held by China.

According to Australia's Register of Foreign Ownership of Agricultural Land, published here by the Australian government on June 30, 2018, just 13.4 percent of Australian land in 2017-18 had “a level of foreign interest”, and 80 percent of this was on a leasehold basis, ruling out complete ownership as the map suggested.

Below is a screenshot of this section of the report, with the relevant figure highlighted in red by AFP: 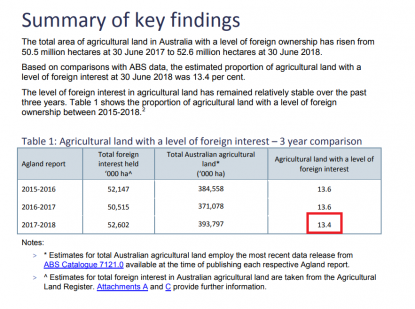 A screenshot of the government report

The report lists the United Kingdom as the largest foreign agricultural land holder in Australia, with 2.6 percent; followed by China with 2.3 percent; and the United States with 0.7 percent.

Below is a screenshot of this section of the report, with the relevant section highlighted in red by AFP:

A screenshot of the government report

Below is a screenshot of the section the report which lists countries in order of how much agricultural land they hold in Australia by hectares: 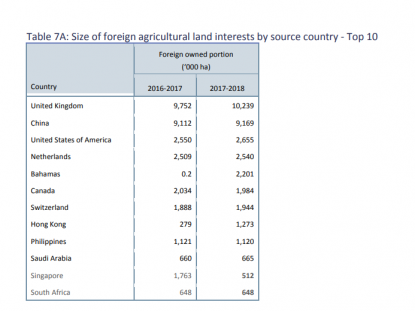