This article about the Hong Kong police has been doctored; South Korea said the claim was 'fake'

An article circulating online claims that South Korea, in response to human rights concerns, has announced it will arrest and imprison members of the Hong Kong police and their families if they try to enter the country. The claim is false; the purported article was mostly taken from two reports by Hong Kong news site Stand News and adds a misleading headline; South Korea has not issued any new immigration regulations on Hong Kong police; Seoul’s consulate in Hong Kong said the claim was false, and that the country did not block visitors’ entry on the basis of their occupation.

The misleading article has circulated widely online, for example here and here on information sites Buzznews and jChannel on December 7, 2019.

The jChannel report has been shared by social media pages with more than five million followers in total, according to CrowdTangle data. 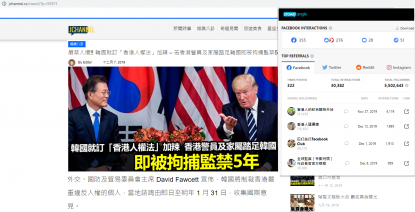 Screenshot of the jChannel report with the CrowdTangle data

The traditional Chinese-language headline of the article translates to English as: “No entry!! Korea tightens policies after ‘Hong Kong Human Rights and Democracy Act’ is enacted - Hong Kong police officers and their families will be arrested and imprisoned for five years if entering Korea”.

While Korea as a region includes the countries of North and South Koreas, the claim targets South Korea as the country’s president, Moon Jae-in, as well as its flag, can be seen in two images included in the misleading article.

The Hong Kong Human Rights and Democracy Act was signed into law by US President Donald Trump on November 27, 2019, in support of Hong Kong’s pro-democracy protesters. Here is an AFP report on the legislation, which requires an annual review of freedoms in Hong Kong and bans the sale of crowd control equipment. 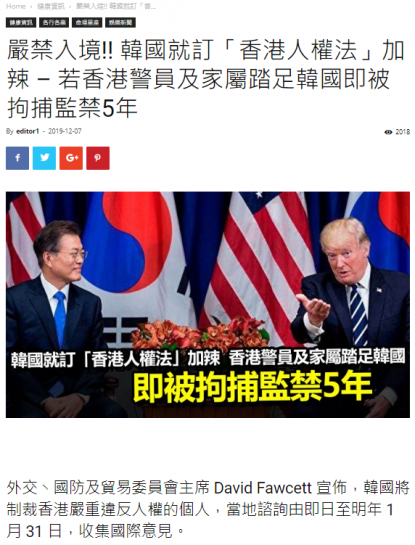 The first five paragraphs of the misleading article have been doctored from this December 4, 2019, Stand News report with the title “Parliament of Australia to consult whether to enact an Australian version of ‘Human Rights and Democracy Act’ in order to sanction human rights violators”.

The misleading article replaces references to Australia with South Korea. For instance, David Fawcett, the chairperson of Australia’s Joint Standing Committee on Foreign Affairs, Defence and Trade, was described by the false claim as making an announcement on behalf of South Korea.

A line was added to the fourth paragraph of the purported article claiming that South Korea will punish Hong Kong police officers and their families with jail time should they attempt to enter the country.

The paragraph translates to English as: “And today South Korea tightens policies after ‘Hong Kong Human Rights and Democracy Act’ is enacted - Hong Kong police officers and their families will be arrested and imprisoned for five years if entering Korea”.

The formatting of that sentence is irregular and in contrast to the rest of the article, as highlighted by AFP in the screenshot below: 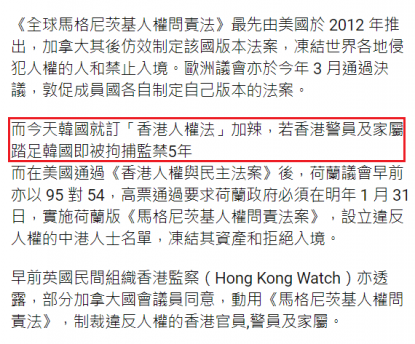 Screenshot of the sentence from the article

The remainder of the article was mostly taken from this November 21, 2019, Stand News report, which is titled “[Hong Kong Human Rights and Democracy Act] Hong Kong government: US interference in Hong Kong’s internal affairs does not help ease tension”.

A spokesperson from the Consulate General of the Republic of Korea in Hong Kong told AFP the suggestion that Hong Kong police and their families would be arrested by South Korea was “fake news”.

“The Korean government does not discriminate against any foreigners who want to visit Korea based on gender, occupation and etc.,” said the spokesperson.

“In particular, there have been no announcements about the refuse or arrest of Hong Kong police and police families upon visiting Korea mentioned in the news.” 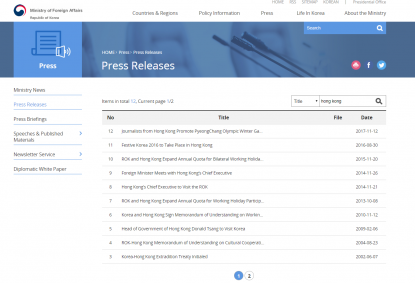 A search for "Hong Kong" in Korean language here on the Ministry of Justice's website retrieved no results.

A reverse image search on Google found the two photos of US President Donald Trump and his South Korean counterpart Moon Jae-in published in the misleading article were orginially taken by news agencies during the United Nations General Assembly.

The first one was credited to AFP on September 21, 2017, and the second one was captured by an Associated Press (AP) photographer on September 24, 2018. The photographs can be seen here and here on the AFP and AP websites.

Below are screenshots of the two photos:

Screenshots of the two news photos