This photo shows a police officer in Rio de Janeiro, Brazil in May 2012

The photo was published here on Twitter on December 16, 2019.

It shows a police officer spraying a substance at a dog's face as he walks along a street with two other officers. 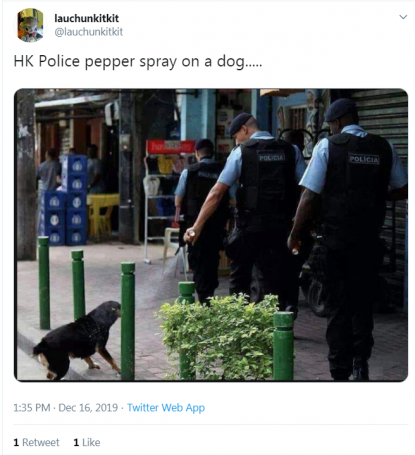 Hong Kong police have been accused of using excessive force against protesters, as the semi-autonomous city enters its seventh consecutive month of pro-democracy demonstrations. The Hong Kong government's Independent Police Complaints Commission has been instructed to probe accusations of brutality against the protesters, as reported here by AFP.

The same photo was shared here, here and here on Twitter alongside a similar claim.

The photo was also shared more than 2,000 times in various Hong Kong related Facebook pages and groups here, here and here; as well as on Hong Kong forum LIHKG with a similar claim.

This claim is false; the photo shows a police officer pepper spraying a dog in the Rocinha favela of Rio de Janeiro, Brazil in 2012.

A reverse image search of the photo found this article published by Brazilian newspaper O Globo on May 7, 2012. The Portuguese-language headline translates to English as: “Military Police assesses whether to punish police who used pepper spray on dog”.

The same photo, accredited to Domingos Peixoto of O Globo, has the caption: “The policeman uses pepper spray on the dog's eyes in Rocinha."

Below is a screenshot of the photo in the O Globo article: 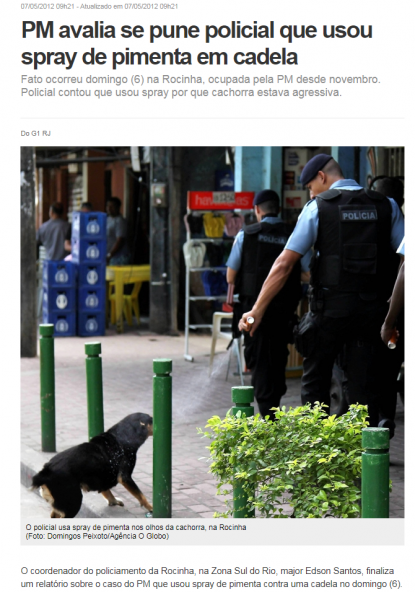 A screenshot of the photo in the article

The report states: “The police coordinator of Rocinha in the South Zone of Rio, Major Edson Santos, finalises a report on the case of the military policeman who used pepper spray on a dog on Sunday (6). He informed this Monday (7) morning that the report will be sent to the Military Police review board to decide whether or not the police officer will be punished.

"The scene recorded by O Globo newspaper on Sunday morning caused controversy on social networks. The scene was recorded after a confrontation between policemen and drug dealers that took place in the early hours of the morning."

Below is a screenshot comparison of the photo (L) used in false context and the O Globo photo (R): 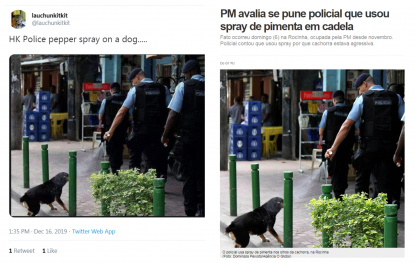 The same photo was used in this report published by São Paulo-based news site Universo Online on May 7, 2012. The same incident was also reported here by Rio de Janeiro-based newspaper The Rio Times on May 7, 2012.