Skip to main content
Canada Geese fly in at sunrise to The Wildfowl and Wetlands Trust centre in Arundel on January 21, 2017 (AFP / Glyn Kirk)

A Facebook post misleadingly suggests that wind farms kill many more birds than oil companies, but escape any monetary penalties. However, oil companies are responsible for higher bird death rates overall, and US wind farm companies have had to pay fines for their impact on bird populations. Moreover, one unexpected factor causes more bird deaths than both industries combined: cats.

According to a post shared more than 3,000 times, a single oil company was fined $600,000 for the death of 85 birds, while wind farms, who collectively caused 440,000 bird deaths, were never fined. These numbers are misleading. 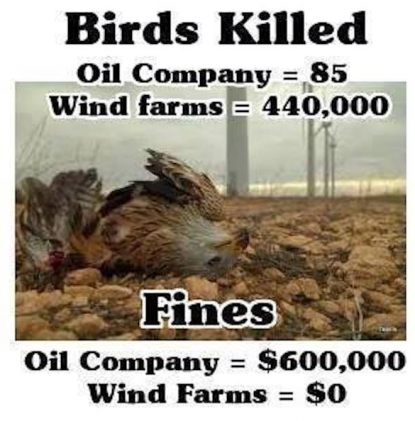 The group that published the meme, “BC Patriots,” is from British Columbia, Canada’s westernmost province, yet the post refers to data from the United States.

The story of an oil company made to pay $600,000 for the death of 85 birds is true. It refers to a 2009 court case involving Exxon Mobil. The American oil giant was charged for the deaths of protected migratory birds that landed in the company’s wastewater ponds in five US states. The company was charged with violating the Migratory Bird Treaty Act (MBTA), a law that protects more than 1,000 species of birds on US soil.

In contrast to the meme’s assertions, US wind farm companies have been charged for bird deaths under the MBTA, such as Duke Energy Renewables. In 2013, it was the first wind power company charged under the MBTA, and had to pay $1 million for the death of 163 protected birds. Similarly, PacifiCorp was fined (page 14) $2.5 million in 2014 for the death of 374 protected birds.

AFP Fact Check did not find any cases of wind farms fined for bird deaths in Canada, although several oil companies in the country have been fined for the deaths of birds landing in waste pits or oil pits. Ted Cheskey and Stephen Hazell, directors at Nature Canada, an environmental organization, told AFP that they were not aware of any prosecutions of wind energy companies in Canada. A spokesperson from Environment and Climate Change Canada also confirmed to AFP that no wind farm company was ever prosecuted under the Migratory Bird Convention Pact, Canada’s MBTA.

Bird deaths on an industry-wide scale

The post also misleads online users by comparing bird deaths from a single case to that of an entire industry. The number 440,000 is from a 2009 study by former US Fish and Wildlife Service (FWS) researcher Albert Manville, and refers to the estimated number of birds killed by wind farms in the United States.

However, the FWS website references a different study on its webpage dedicated to bird deaths. According to that study, collisions with land-based turbines killed between 140,438 and 234,012 birds (Loss et al. 2013b), while oil pits killed between 500,000 and 750,000 birds (Trail 2006). The studies were completed in 2013 and 2006 respectively, and refer to all bird species, not just protected ones. 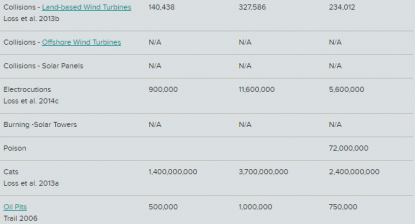 Screenshot of the Fish and Wildlife Service website on January 29, 2019

In Canada, a 2013 study from Nature Canada estimated that 13,060 birds are killed by wind turbines annually, while the oil and gas industry is responsible for 18,661 bird deaths.

The bird mortality rate attributable to wind energy companies remains a controversial topic. Manville, the researcher behind the figure cited in the meme, told AFP that he feels the study currently referenced by FWS is underestimating the problem. Despite this, Manville’s estimation of 440,000 bird deaths is still lower than the most conservative estimate of bird deaths caused by oil pits, which is 500,000.

Although both the wind and the oil industries are responsible for a non-negligible number of bird deaths each year, one other culprit stands out: cats. In both Canada and the United States, felines were the number one cause of bird mortality, by a long margin. In the United States, a 2013 study, also referenced by FWS, estimated that between 1.3 and 4 billion birds are killed each year by cats. In Canada, the number was between 76 and 418 million.

Although AFP Fact Check found no evidence of a wind farm charged for bird deaths in Canada, this has happened in the United States, the country to which the Facebook post refers. Overall, the oil industry is responsible for more bird deaths than wind power, although cat-related bird deaths are higher than both industries combined.