A United Conservative Party (UCP) candidate in the western Canadian province of Alberta tweeted that the provincial carbon tax had cost her church in the town of Medicine Hat Cad$50,000 in one year. This post was false. The pastor of the church clarified that the actual carbon levy cost was only $5,443, a fact the candidate eventually acknowledged in a Facebook post.

“Today at Church we learned that the Carbon Tax is going to cost our church $50 000 this year ALONE,” stated a tweet from Michaela Glasgo, a candidate in the Brooks-Medicine Hat riding for the UCP, an Alberta provincial party. The tweet, whose content was also posted on Glasgo’s Facebook page, was subsequently shared by UCP party leader Jason Kenney, boosting its visibility. 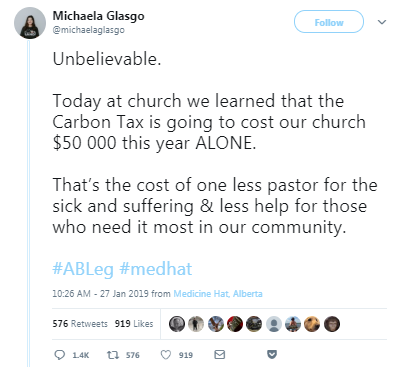 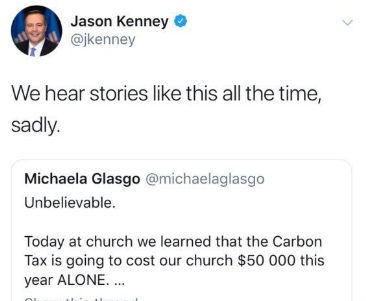 Several online users asked for the name of the church in order to verify the claim, information Glasgo refused to disclose, stating that her claims should not be taken as “a political attack or statement by the church.”

Faced with a torrent of criticism and scepticism, Glasgo clarified in a Facebook post that, after speaking with her church, it had come to light that the $50,000 referred to the overall increase of the facility’s operational costs between 2017 and 2019.

Steve Pahl, pastor of Hillcrest Church, also clarified the numbers in a statement he gave to members of the media, including AFP. He said Hillcrest Church, an evangelical church in the south of Medicine Hat, reported paying $5,443 because of the carbon levy in 2017, a number expected to remain stable in 2019. The increase in operational costs also included items such as an extended snow removal contract and other building maintenance.

“The carbon tax was used as one example of the kind of increases we have incurred. Someone misunderstood that to mean the carbon tax was responsible for the entire $50,000 increase and tweeted about it,” Pahl said in his statement.

The carbon tax is a politically controversial topic in Canada. The federal government headed by Justin Trudeau’s Liberals announced its plan to impose a countrywide carbon pricing system in 2019. Alberta already has such a system, which was implemented by the province’s New Democratic Party in 2017, and has been the target of political criticism since.

The carbon levy, as it is known in Alberta, charges carbon consumers a price per gallon of fuel used. At the lower end, 4.62 cents are charged on each liter of propane, while a gallon of natural gas costs an extra Cad$1.517.

Screenshot taken on January 29, 2019 of the Alberta carbon levy chart

Online users were quick to point out that a single church would be unlikely to be charged Cad$50,000 under the carbon levy, since that would assume the fuel consumption of 243 4-person homes heated solely with natural gas and which received no tax rebates.

Screenshot taken on January 29, 2019 of the Alberta carbon levy chart

University of Alberta associate professor Andrew Leach further argued in an online post that for a church to spend Cad$50,000 in carbon levies, it would have to emit the equivalent of 1 percent of all emissions from the religious sector in Alberta in a year. 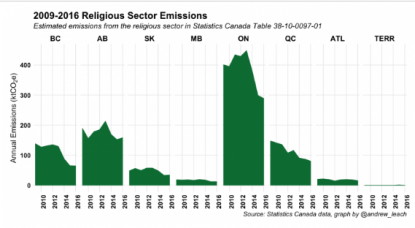 Screenshot taken on January 29, 2019 of a chart from of Andrew Leach's blog

University of Calgary assistant professor Jennifer Winter, whose research focuses on the impact of government regulation on the development of natural resources, told AFP that mistakes in calculating the costs of carbon taxes are common and pointed to a blog post she wrote on erroneous carbon tax estimates in New Brunswick, one of Canada’s Atlantic provinces.

Despite the Facebook statement clarifying Glasgo’s original false post, the erroneous tweet was still online and being shared at the time of publication. Kenney’s retweet was retracted.