Old videos of Turkish army convoys were filmed in Syria and Russia, not in Palestinian territories

A Facebook post featuring footage of military convoys claims the video shows Turkish soldiers arriving in the Palestinian territories where fresh violence erupted between Israel and Hamas militants in May 2021. However, the claim is false: the footage comprises two old clips filmed at unrelated events in Syria and Russia.

The footage has been viewed more than 20,000 times since it was published by a Facebook page called “Palestine-Esrael Update” on May 22, 2021. The account, with more than 56,000 followers, was created on May 14, 2021 — four days after violence erupted between Israel and Hamas, the Islamic military group that controls the Gaza Strip.

AFP has covered the clashes and the subsequent ceasefire, which came into effect on May 21, 2021.

“Turkey Army arrival in Palestine (sic),” the caption of the misleading post reads.

It adds that the purported arrival of Turkish soldiers may be “why the #ceasefire was Established (sic)”.

The first part of the footage shows convoys of heavy-duty trucks and military tanks driving along dusty roads past waving onlookers, including children.  The segment lasts 48 seconds and includes different scenes, showing the vehicles also moving through a hilly landscape.

The second clip, which lasts around 16 minutes, also shows a military convoy, this time led by four white vehicles blaring their sirens.

AFP Fact Check carried out multiple reverse image searches on keyframes extracted from the first, shorter video and found an image of a scene from the clip in AFP’s online archives. 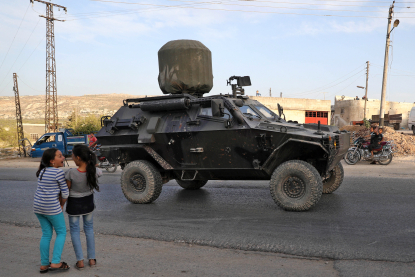 “An armoured vehicle drives as part of a Turkish military convoy through the town of Urum al-Jawz, near Ariha in Syria’s rebel-held northwestern Idlib province on October 20, 2020, after vacating the Morek post in Hama’s countryside,” the photo caption reads.

It was taken by AFP photographer Omar Haj Kadour after Turkey started withdrawing from one of its largest outposts in Morek, northwest Syria, a region now mostly under Syrian government control.

AFP Fact Check found that the clothing worn by the two girls in the image matched the outfits seen on two children in the first video on Facebook. 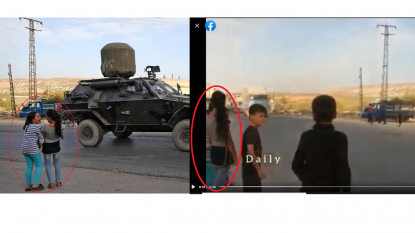 Screenshot showing the similarities between the AFP photo and the clip

Although the similarities and caption of the photo provided some clues, AFP Fact Check managed to trace the footage to a Syrian opposition YouTube channel with the help of local AFP stringers. The footage was published on the video-sharing platform on October 20, 2020.

A reverse image search on keyframes of the second clip led to this higher quality version on YouTube. It shows the Facebook version was sped up to give the impression the tanks were rushing.

The video from March 16, 2019, shows Russian military convoys moving through the capital Moscow after a rehearsal for the 2019 Victory Parade, an annual military event held on May 9 to commemorate the Soviet victory in World War II.

Bilateral relations between Turkey and Israel soured in 2018 after the two nations withdrew each other’s ambassadors. The expulsions followed the killing of 60 Palestinians by Israeli forces during a protest in Gaza to stop the relocation of the US embassy from Tel Aviv to Jerusalem.

With the recent violence in the Gaza Strip, Turkish President Tayyip Erdogan accused Israel of “terrorism” against the Palestinians.

AFP Fact Check has debunked several claims that Turkey sent troops to intervene in the latest conflict between Israel and Hamas (here, here and here).