Clip shows Turkish soldiers en route to Syria in 2018, not in Jerusalem in 2021

A post with a video viewed thousand of times on Facebook and TikTok purports to show Turkish soldiers arriving at the Al-Aqsa mosque in Jerusalem amid the latest Israeli-Palestinian conflict. But the claim is false: while the clip is of Turkish soldiers, it was taken in 2018 when the country sent troops to Syria to fight Kurdish forces.

In the recording, an army vehicle cruises past a cheering crowd while waving a Turkish flag. A soldier with glasses and a blue beret is seen shaking hands with people in the crowd.

The same video was published on TikTok here with the caption: “free palstine we are with palstine always (sic)”. 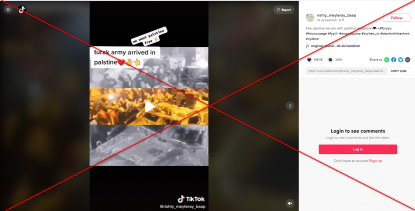 A different version of the video in Bosnian, taken from the same parade, also appeared here on Facebook with the same false claim.

By doing reverse image searches on selected video keyframes, AFP Fact Check found a longer version of the video posted on YouTube on January 1, 2019. According to the description, the clip was taken in Pazarcık in Kahramanmaraş district, the site of a military base in Turkey.

A further search with the additional location details led to this YouTube video published by Turkish news site Aksu TV Haber on February 13, 2018. The bespectacled army official (who also appears in the Facebook video) can be seen 2’10” into the clip.

A caption accompanying the video reads: “Citizens of the military convoy that went to the borderline for Operation Olive Branch in Kahramanmaraş held a farewell ceremony in Pazarcık district center”. 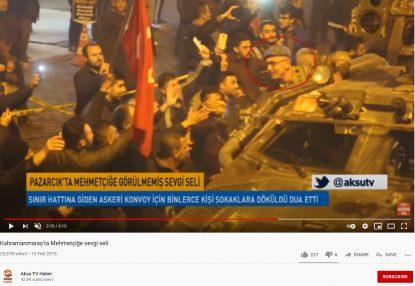 A screenshot of the video published by Turkish news outlet Aksu TV Haber’s YouTube channel, taken on May 20, 2021

The latest deadly clashes between Israel and Palestinians were sparked by a years-long bid by Jewish settlers to take over Arab homes in the Sheikh Jara settlement in annexed East Jerusalem. Protests followed, leading to Israeli forces storming the Al-Aqsa mosque compound in Jerusalem – one of Islam’s holiest sites.

The bloody conflict escalated after Hamas, the Islamic group that controls Gaza, had launched rockets at Israel, which responded with a deadly bombing campaign.