An image widely shared on social media shows furniture piled outside Zimbabwe’s London embassy, alongside claims that the government has been kicked out of the offices for failing to pay rent. This is false; Zimbabwe’s government owns the building and therefore cannot be evicted. Officials confirmed that the embassy had thrown out office furniture as part of a general “cleaning exercise”.

“Zimbabwe Embassy evicted from their rented building in London for not paying rent. Mnangagwa must go…. What an embarrassment to our nation,” reads the text accompanying the image in a September 26 Facebook post which we’ve archived here.

The photo shows furniture all along the sidewalk in front of the entrance to Zimbabwe House, the country’s embassy in London. The building seen in the photo is indeed Zimbabwe’s London embassy -- you can recognise it from images available on Google Maps. 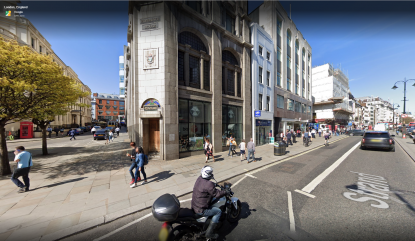 A screenshot taken on October 16, 2019 of Zimbabwe House on Google Maps

AFP on October 3 called the number listed for Zimbabwe House at 429 Strand in London, to confirm if the embassy had been closed or evicted from its location.

“No,it is not [closed], you can just walk into our office -- if you want to see, you can visit us right now. We are right opposite Charing Cross Police Station, 429,” said a male staff member in the House.

The Zimbabwe Embassy told AFP that the picture shows the last load of old furniture waiting to be collected after the building was cleaned.

“The embassy undertook a general cleaning exercise and disposed of old furniture as well as obsolete equipment which had accumulated over the years,” said T.J. Chimbandi of the embassy on behalf of the Zimbabwe ambassador.

“The equipment and furniture was gathered outside the entrance of the Embassy for collection by a disposal company the embassy contracted.” 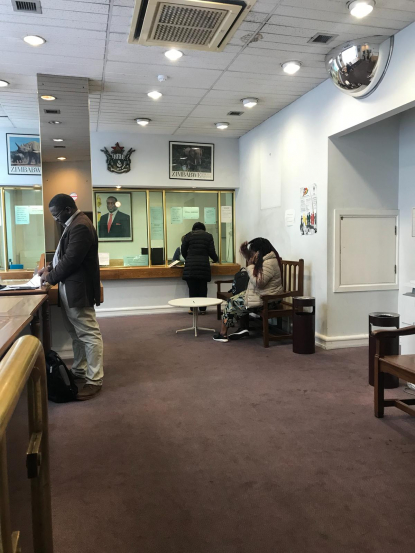 An image taken on October 11, 2019 inside Zimbabwe House by AFP Fact Check

Shortly after the post first appeared, social media users  rejected the eviction claim, commenting that the embassy had been operating normally.

“Was business as usual all day,” one user wrote in a September 25 comment on another Facebook post making the eviction claim. He posted a picture of what appeared to be a queue inside the embassy. The room matches the appearance of another image of the inside of the embassy taken in 2017 -- you can see the same distinctive crest hanging above the gold window frame. 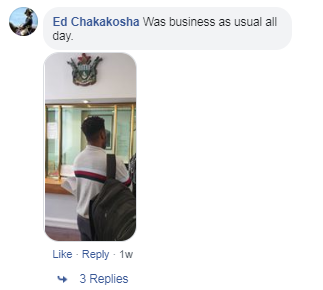 The London Diplomatic List, containing the addresses and contact details of all embassies and High Commissions, was updated on October 2, days after the claims about the eviction.

AFP in London also visited the building on October 11 and saw that the embassy was operating as normal.

It’s been known as Zimbabwe House since the country’s independence in 1980. Prior to that, it was known as Rhodesia House.

Zimbabwe House is also a Grade II* listed building on the National Heritage List for England - that grading means it’s an important building of more than special interest.

According to the UK Land Registry, Zimbabwe House belongs to the Zimbabwe government.

“The registration took place in 1965, at which time the ownership was recorded according to the recognised head of state at the time; her Majesty The Queen in her Government of Southern Rhodesia,” said Neil Johnson, a senior spokesman for the UK Land Registry. 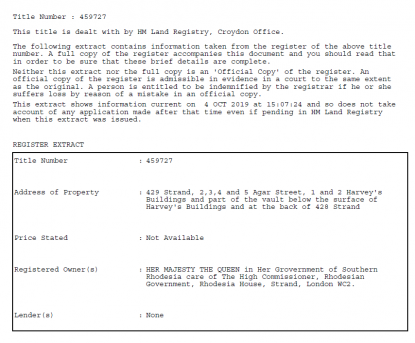 A screenshot of the property title deed, downloaded from the UK Land Registry on October 4, 2019

“After independence, this moved to the government of Zimbabwe,” Johnson added.

Should Zimbabwe want the current ownership to be reflected, it needs to apply to the register.

Comments revealed that just days before online claims about the London eviction began spreading, The Canberra Times in Australia’s capital reported on the Zimbabwe Embassy in O’Malley being up for sale -- which could explain the association.

The article notes how Zimbabwe doesn't “seem to have much luck with their embassies in Canberra” as they moved out of a previous home on Timbarra Crescent when the owner sold it.

The upcoming sale can be confirmed on Australian property website RealestateVIEW going for an asking price of 1,870,000 million dollars. The listing details that they are “currently in a fixed lease with great tenants until 2020”, indicating Zimbabwe doesn’t own the property. 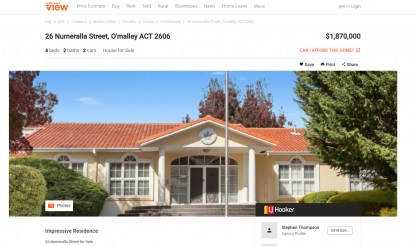 A screenshot taken on October 3, 2019 of the listing on Realestate VIEW.

At the end of 2018, news reports said Zimbabwe was among 23 embassies named by the Foreign Office for dodging UK tax bills worth 1.5 million pounds (approximately 1.8 million US dollars).

As reported by AFP, Zimbabwe’s President Emmerson Mnangagwa this week acknowledged the economic hardships Zimbabweans are suffering and pleaded for patience to allow his government to fix the country's rapidly deteriorating economy.

The economy has been badly suffering for two decades, but the last 12 months have been the worst decline in 10 years, characterised by shortages of basic goods such as fuel and electricity.

Mnangagwa won a July 30 election last year, taking over after 37 years of authoritarian rule under Zimbabwe's founding president Robert Mugabe, who died in hospital in September 2019.