A viral video claims to show Nigeria’s first lady Aisha Buhari complaining after she was locked up in the presidential villa by a “cabal” around her husband for two months. The same video has been shared with many more different claims. We checked and found most of them to be misleading. Mrs Buhari has said the video was “old”  and showed her in a dispute with some of her husband’s relatives.

One post shared on Facebook, archived here and seen by over 52,000 people, claims that Aisha Buhari “was locked up in a room for months. Surrounded by over 200 military and police men. She wanted to leave the villa but never allowed.” The post was created on Friday October 11, 2019.

The video was also posted by another Facebook Page, claiming the first lady had returned from a trip to the UK but was denied access to her room at the presidential villa, which is also called Aso Rock.

“Wahala! We heard the 1st lady Aisha Buhari is allegedly back from London, but Aso Rock cabals locked her up in her room despite over 200 soldiers & 200 police plus plainclothes security personnel guarding the villa according to her,” read the post, which has been shared over 2,000 times and seen by 50,000 people. 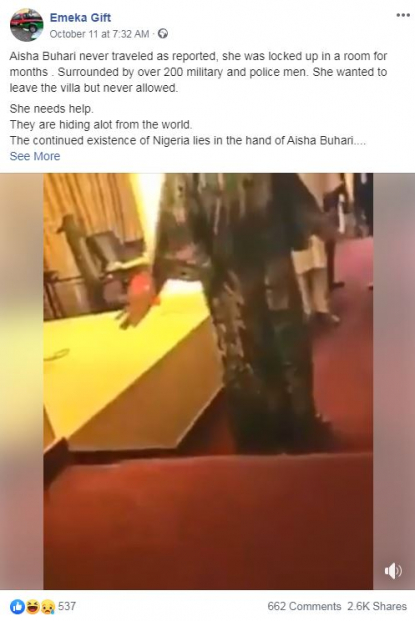 A screenshot taken on October 17, 2019, claiming to show Aisha Buhari locked up in a room for two months

The same video was posted by Facebook user Chidi Cali. He claimed the first lady arrived in Nigeria and was denied entry into the villa by the “cabal”.

Background on the rumours

In 2016, Mrs Buhari suggested in an interview with the BBC Hausa Service that her husband’s government had been hijacked by a “few people”, who she claimed were behind presidential appointments. Buhari responded to the interview while away in Germany, saying: “I don't know which party my wife belongs to, but she belongs to my kitchen and my living room and the other room."

In an interview with Voice of America Hausa Service, the president asked those making the claims to point to one decision the supposed cabal has made him do.

What happened in the video?

In the video, a woman believed to be the first lady is seen saying “this is the villa...we have over 200 soldiers guarding us… 200 policemen guarding us… why do you have to lock this door?”

Aisha Buhari confirmed to journalists in Abuja on Sunday, October 13, 2019, that the video indeed shows her at the presidential villa.

“The video was an old video. The event happened. It was me. Actually, it happened in the villa,” she confirmed.

She later told BBC Hausa service that the video was recorded by Fatima Daura, the daughter of Mamman Daura.

The name Mamman Daura trended on Twitter in Nigeria for nearly 24 hours on October 15, 2019 -- he is regarded by many Nigerians as the head of a cabal within the presidency. He is a nephew of Nigerian President Muhammadu Buhari, according to the BBC and local media.

“It was Fatima, the daughter of Mamman Daura that shot the video in front of my security and everybody there. She was actually recording the whole thing right in front of me and was laughing and mocking me,” Aisha Buhari told the BBC Hausa service.

Fatima Daura confirmed to the BBC that she recorded the video at about the time the president’s son Yusuf Buhari had an accident and needed to stay in the apartment in the villa called “House No. 8”, which was previously occupied by Mamman Daura.