A social media post shared hundreds of times claims that a new law creates a bail-in program which would allow Canadian banks to use deposited money to pay the debt of the country. This is false; the bail-in regime introduced in 2016 allows Canada’s six largest banks to convert their debt into common shares and is not related to Canada’s national debt. Individual deposits are protected up to $100,000 by the Canadian Deposit Insurance Corporation.

“The banks have a bail-in program that leaves anyone with money in the bank paying the debt of the country if anything goes sideways,” claims a Facebook post popular on Canadian social media. The author of the post, which was subsequently shared as a screenshot, goes on to suggest that this is due to new legislation. 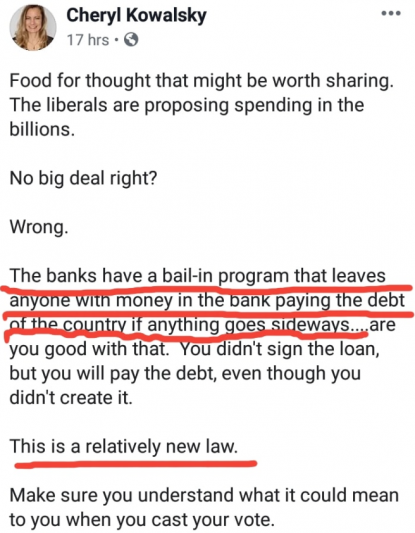 Following the 2008 financial crisis that required the bailout of several US and European banks, Canada introduced new mechanisms meant to avoid a similar scenario. The regulation introduced to the Canadian financial system in 2016 allows for the bail-in of certain banks, but it is not related to paying the country’s sovereign debt.

Six large banks, also known as domestic systemically important banks, were given the power to convert their long-term debt into common shares. Should one of these banks be found to be non-viable or on the verge of failure, the Canadian Deposit Insurance Corporation (CDIC), a crown corporation in charge of ensuring Canadians do not lose their savings if a bank fails, can take temporary control of the bank and authorize the conversion of certain bonds into shares for the banking institution.

The bail-framework, which came into force in September 2018, does not allow for the conversion of deposits such as checking and savings accounts.

“Bail-in reinforces that bank creditors and shareholders are responsible for banks’ risks - not the taxpayer or depositors,” Anna Arneson, a spokesperson for the Department of Finance, told AFP in an email.

In the event of a banking failure in Canada, CDIC protects eligible deposits up to $100,000 per account per banking institution, so long as the bank is a member of CDIC.

Checking and savings accounts, Registered Retirement Savings Plans (RRSPs) and Tax-Free Savings Accounts (TFSAs) are among the types of deposits protected by CDIC. However, in the case of RRSPs and TFSAs, financial products like stocks, bonds, or mutual funds are not protected, Mathieu Larocque, spokesperson for CDIC, told AFP in an email.

In the event of a banking failure, Canadian savers with more than $100,000 in an account protected by CDIC would be reimbursed $100,000 by CDIC, and would have to file a claim with the banking institution for the remainder, Larocque told AFP. The CDIC websites provides Canadians with this tool to calculate how much of their savings are protected.

Although Canadian banks were spared by the 2008 financial crisis, banking failures have occurred in Canada in the past. Forty-three CDIC member institutions have failed since the crown corporation’s creation over fifty years ago.

Most recently, Calgary-based Security Home Mortgage Corporation went bankrupt in 1996. According to a CDIC book on the insurer’s history, 2,600 Canadians had deposited $42 million in the Mortgage Corporation, of which all but $10,000 were insured. All insured deposits were paid back within three weeks.