A video of a little girl stylistically singing Dinah Washington's “What a Difference a Day Made” has been viewed more than 30 million times on Facebook alongside a claim that it shows a performance from the late British singer Amy Winehouse at age 10. The claim is false; the video shows a 2014 performance by Angelina Jordan, winner of Norway's Got Talent, who was 8 years old at the time. Winehouse died in 2011.

In 2015, a Facebook account twice shared a video of a young girl singing the late American singer Dinah Washington's "What a Difference a Day Made" in a live television performance.

British singer-songwriter Amy Winehouse died at age 27 in 2011. An inquest released in 2013 found she died after drinking too much alcohol.

AFP released this video report on July 23, 2011, the day Winehouse was found dead, featuring archival footage of the singer. 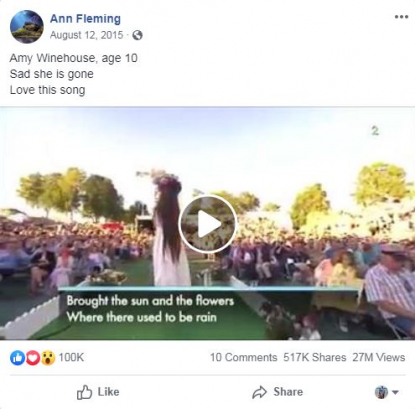 Initial comments on the post indicated that people believed the caption:

The claim is false; the video shows a performance from Norwegian singer Angelina Jordan in 2014, three years after Winehouse's death.

The original video was posted to YouTube by TV 2, a government-owned television station in Denmark, on July 3, 2014.

The caption for the video says: “Amazing! 8 year old Angelina Jordan, winner of Norway’s Got Talent 2014, performs Dinah Washington’s 'What a Difference a Day Made' on the opening show of TV 2 singalong summer hit ‘Allsang på grensen’ on Thursday June 3rd 2014.”

Here is the same video on the official website of Jordan, who won the 2014 edition of Norway's Got Talent.

This clip from the documentary “Amy”, which is about Winehouse’s life, shows an early example of her singing in at age 14 in 1998.

The Facebook user who uploaded the video along with a wrong caption also realised her mistake and posted an apology on August 20, 2015, stating the video does not show Winehouse. 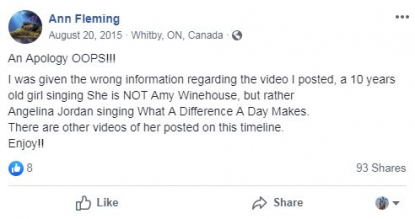 Despite this effort, fact-checking site Snopes said the video was still circulating online along with the false claim in 2016.

The misleading Facebook posts now include comments pointing to the fact that the video in fact shows Jordan, not Winehouse, but people continue to share the video with the incorrect caption in 2019.