A video has been viewed tens of thousands of times in multiple Facebook posts alongside a claim that it shows a copy of the Koran that survived a fire at a mosque in Indonesia’s Papua province. The claim is false; the video has previously circulated in reports about a collection of Korans which survived a fire at a Saudi Airlines office in Dhaka, Bangladesh in October 2019; a journalist in AFP's Dhaka bureau said a woman could be heard speaking about the fire in Bengali in the video; local media reports stated a fire gutted the Saudi Airlines office in Dhaka on October 1, 2019.

The post's Indonesian-language caption translates to English as: “Foreign (French) media covering the remains of a burnt down mosque in Wamena, Mashallah.. the Koran remains intact not burned....

"GOD IS THE GREATEST.” 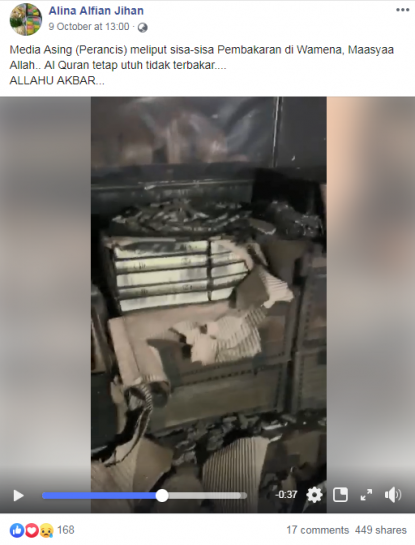 Wamena is a town in Indonesia’s Papua province that has experienced one of the worst clashes since violence broke out in the Papua region in August 2019. AFP reports on the unrest can be read here and here.

“Mashallah” is an Arabic phrase which means this is what God wills. It is also used to express praise.

The same video was also viewed thousands of times after it was published on Facebook here, here, here and here, with a similar claim.

The claim is false; the video has previously circulated in reports about a collection of Korans which survived a fire at a Saudi Airlines office in Bangladesh in October 2019.

A Google keyword search found this one-minute, 30-second video published on YouTube on October 7, 2019, which shows identical scenes as the clip in the misleading post.

A woman’s voice could be heard speaking in Bengali throughout the video. According to a journalist at AFP’s Dhaka bureau, she said:
“The miracle thing is the Korans didn’t burn. See all the Korans are intact. Everything else is burnt, praise to Allah! See Nazir? Not a single Koran got burnt. Praise to Allah! Amazing huh! See all Korans are as they are! Even the packages are burnt but not the Koran! Did you see? I am feeling goosebumps!”

Below is a comparison screenshot of the video in the misleading post (L) and the earlier YouTube video (R):

The incident happened on October 1, 2019, as reported by the Dhaka Tribune here and United News of Bangladesh here on the same day.

“The fire, which broke out at the Pan Pacific Sonargaon Hotel in Dhaka, has been doused.

Saudi Airlines' Dhaka office was located inside the Pan Pacific Sonargaon hotel according to its official website here.

Photos showing the outside of the Saudi Airlines office in Dhaka tagged on Google Street View here and here correspond with the video in the misleading posts.