A video has been viewed more than one million times in multiple posts on Facebook alongside a claim it shows Typhoon Hagibis hitting the Japanese island of Hachijō-jima. The claim is false; the video was in fact filmed in Hong Kong during Typhoon Mangkhut in September 2018.

The 35-second video was viewed more than 1.3 million times after being published here on Facebook on October 11, 2019, one day before Typhoon Hagibis made landfall in Japan.

At least 74 people have died and dozens remain missing after the typhoon slammed into Japan, according to this AFP report published on October 16.

Hachijō-jima is a Japanese island in the Philippine Sea, south of Tokyo. 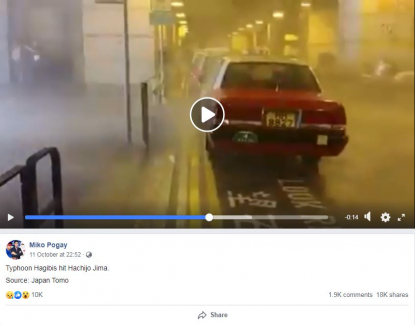 The video has also been viewed tens of thousands of times here, here and here on Facebook alongside an identical claim.

A reverse image search on Google using keyframes from the video in the misleading post extracted with verification tool InVID found a higher-definition version of the video published in this Facebook post on September 16, 2018, by the HK Bus Channel page.

A separate video posted to the page later in the day shows an intensified storm with floodwaters rushing into the terminus.

An AFP journalist in Hong Kong translated the traditional Chinese language caption of the post to English as: “16/9 Hong Kong was hit by #SuperTyphoon #Mangkhut. Under Hurricane Signal No. 10, the bus termibus at Island Resort was battered by powerful winds. The government warned citizens should seek shelter at safe places as soon as possible.

“Debris caused by the typhoon damaged the windows of buses parked at the terminus, including a New World First Bus #6013, which had four pieces of glass on its left completely destroyed.

“*The clip was re-posted from a Whatsapp group”.

Mangkhut prompted the Hong Kong Observatory (HKO) to hoist the Hurricane Signal No. 10, the highest level of the city’s tropical cyclone warning signals.

The typhoon left a trail of destruction in Hong Kong and Macau before making landfall in China on September 16, 2018.

AFP reported on September 17 the typhoon had killed at least 59 people in the Philippines.

This report from the HKO, titled “Super Typhoon Mangkhut (1822) 7 to 17 September 2018”, states in part: “The destructive storm to hurricane force winds affected Hong Kong for a long period of time during the day of 16 September. Mangkhut came closest to the Hong Kong Observatory Headquarters around 1 p.m. with its centre was located about 100 km to the south-southwest.”

Below is a screenshot comparison of the video in the misleading post (L) and the HK Bus Channel video (R):

The bus terminus at Island Resort, a building complex in Hong Kong, also houses a taxi stand, as seen here and here in Google user images tagged at the location on Google Maps.

Below is a screenshot comparison between the video in the misleading post (L) and photos of the taxi stand geotagged to Google Maps (C and R) with key identifying features circled in red by AFP:

The video in the misleading post also corresponds with photos posted to the hkitalk.net forum on September 17, 2018, under a title that translates into English as: “[Sharing from the scene] 29 hours at Island Resort during Mangkhut”.

Below is a screenshot comparison between the video in the misleading post (L) and two photos from the post on the forum (C and R) -- note the 1) two people taking photos, 2) pedestrian signs, 3) taxi plate and 4) road markings: