A photo that shows Indian Prime Minister Narendra Modi bowing to a woman has been shared thousands of times in multiple Facebook and Twitter posts alongside a claim that the woman is the wife of Indian industrialist Gautam Adani. The claim is false; the photo, which has circulated online since at least 2014, shows Modi greeting Geetha Rudresh, the former mayor of the southern Indian city of Tumkur; Rudresh’s husband told AFP the photo shows her greeting Modi in his 2014 visit to Tumkur.

The post’s Hindi-language caption translates to English as: “Brothers, the woman in this photo is the wife of industrialist Adani and the man who has bowed down (sold out) is PM of our country. Why doesn't he fall at her feet.”

Narendra Modi is the prime minister of India. 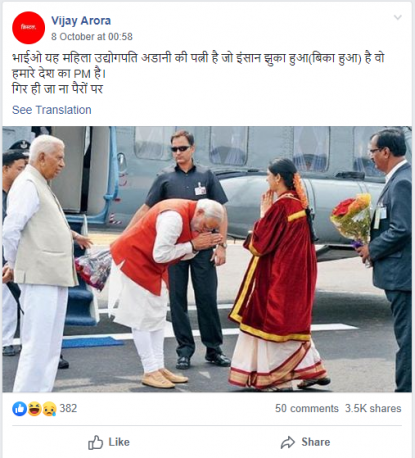 The claim is false; the photo has circulated in media reports since at least September 2014 when Modi visited the southern city of Tumkur to inaugurate a project.

A reverse image search on Google found the same photo published here on Twitter on September 25, 2014. The tweet’s caption states: “This is how PM @narendramodi greeted Tumkur Mayor Geeta Rudresh when she came to welcome him.”

Rudresh is the then mayor of Tumkur, or Tumakuru, an industrial city in the southern Indian state of Karnataka.

The same photo was also published on September 25, 2014, here on Facebook alongside a similar description, and here by Karnataka newspaper Vijaya Karnataka.

Below is a screenshot of the Vijaya Karnataka report: The first paragraph of the Kannada-language report translates to English as: “Intrigued by Prime Minister Modi's visit, the peace process has opened up. The mega food park has been opened without any political confusion and conflicts.”

The event was also featured here on Modi’s personal website.

Below is a screenshot of a photo on Modi's website that shows him at the inaugural event: 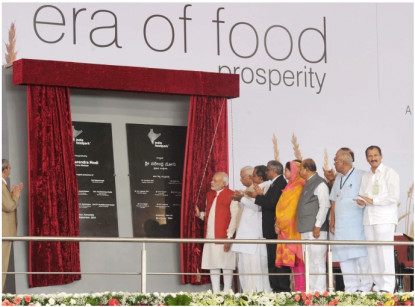 Rudresh is married to a T.V. Rudresh, whereas Adani's wife is Priti Adani. T.V. Rudresh, who identified himself as Geetha Rudresh’s husband, told a journalist at AFP’s Delhi bureau by phone on October 15, 2019, that the photo showed his wife meeting Modi in September 2014.

“My wife Geetha Rudresh was serving as mayor of the Tumkur city at the time PM Modi visited the city to inaugurate a mega food park,” he told AFP.