An article shared thousands of times on Facebook claims that United Nations Secretary-General Antonio Guterres has called on Nigeria to start teaching the Biafran anthem to citizens in preparation for the region’s secession from Nigeria. This is false; a spokeswoman for the UN secretary-general told AFP that Guterres made no such statement.

The article, which has been shared more than 2,500 times on Facebook by accounts sympathetic to the Biafran cause, was posted on a website known for sharing false information, The Pointer News. We’ve archived the article itself here, and some of the Facebook posts sharing it here, here, and here. 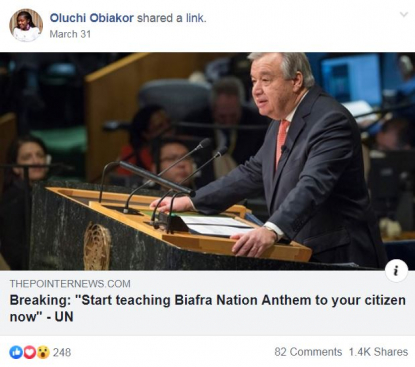 The article claims that “The Secretary General of the United Nations, António Guterres, call on Biafrans, should ‘Start teaching Biafra Nation Anthem to your citizen now.’ Because, the establishment of Biafra as a Nation will soon be a reality.”

The article, which contains just two paragraphs, adds that “According to Biafra Newspaper, ‘It is time for states marks for Biafra Republic, should start teaching Biafra Nation Anthem to its citizen’.”

AFP searched through speeches made by the United Nations secretary-general -- which are publicly available in video on UN WebTV, and in text on the UN website -- and found no mention of such a call for Nigerians to be taught the Biafran anthem.

We also reached out to the secretary-general’s media team to find out if he had made the comments in any message that was not recorded or transmitted in text for public consumption. Keishamaza Rukikaire, associate spokeswoman for the secretary-general, told AFP that “the reports are false”.

Articles falsely reporting expressions of support from world leaders for the Biafran cause often pop up online -- we’ve debunked a couple of them here and here.

Separatists have been pushing for an independent Biafran state in eastern Nigeria for more than fifty years.

A unilateral declaration of an independent republic of Biafra for the Igbo people who dominate southeast Nigeria was made in 1967, sparking a brutal civil war with federal forces that left more than one million people dead from the effects of conflict, starvation and disease.

After the Nigerian military defeated the separatists, the region was re-integrated into Nigeria, but latent secessionist sentiment in the southeast remains.