No, these photographs do not show killings by Fulani herders on Nigeria’s Abuja-Jos road

The pictures, which have been shared over 40,000 times on Facebook and which we've archived here, were posted with a caption that claimed Fulani herdsmen had “started killing people that are traveling from Abuja to jos express road”. They show at least three bloodied bodies lying next to cars at the roadside. 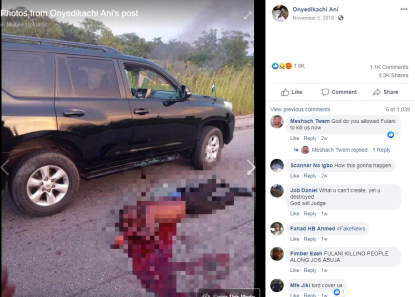 The earliest post sharing the two photos was in a tweet (archived here) on October 20, 2018 which suggested they were taken after an attack on the convoy of a traditional ruler in Kaduna State, northwest Nigeria. The number plate of the black car reads “His Royal Highness Agom Adara”. 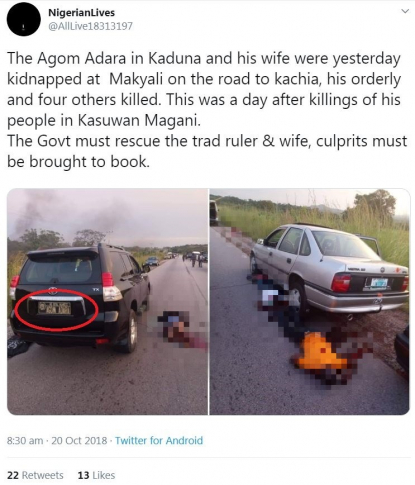 A screenshot taken on May 15, 2019, showing the earliest upload of the pictures on social media

It was also reported by the News Agency of Nigeria (NAN) and other credible local media that the monarch, Galadima Maiwada, the Agom Adara of Adara Chiefdom in Kaduna State, was abducted alongside his wife and driver in the village of Maikyali along the Kaduna-Kachia road.

Four of the Agom Adara’s aides were killed during the abduction. The monarch’s wife and driver were later released, but the Agom Adara himself was killed several days later and his body dumped by the roadside. His death was announced by the Kaduna state government on October 26, 2018.

While the pictures were posted out of context, kidnappings have been on the rise in Nigeria since February’s elections. In April, two aid workers -- one Nigerian, the other British -- were killed when gunmen stormed the Kajuru Castle vacation resort in Kaduna where they were staying. Four other tourists were abducted from the resort.

In January, four Western tourists -- two Americans and two Canadians -- were also abducted in Kaduna by gunmen in an ambush in which two of their police escorts were killed. Such kidnappings are becoming popular in the hope of high ransom payments, particularly for those abducted on the Abuja-Kaduna expressway.

As for the herder killings referred to in the misleading post, Kaduna is also the scene of years-long violence between largely Muslim Fulani herders and indigenous Christian farmers over land and water rights. The violence has taken on an ethnic and religious dimension of late, with politicians accused of inflaming the violence for political ends. You can find AFP reports on violence in the region here and here.