Posts claiming that Angola has banned Islam have begun circulating once again and have been shared thousands of times on Facebook over the past few months. The posts are accompanied by images of ravaged mosques and protesting Muslims as evidence of the ban.

But some of the images used in this post show devastated mosques in Syria, the Gaza Strip, and Bahrain, while the photos of protesters were taken in London when the reports of an Angolan ‘ban’ on Islam first surfaced in 2013. Angolan authorities have repeatedly insisted since then that they have not banned the religion.

A local Muslim leader in Lunda Norte province told AFP that about 40 mosques had been closed in some parts of Angola, forcing those at the border to move to the Democratic Republic of Congo to mark the holy month of Ramadan.

When reports on a ban on Islam first emerged in 2013 -- angering Muslims worldwide -- the government insisted there was no such policy, as reported by AFP.

"There is no war in Angola against Islam or any other religion," Manuel Fernando, director of the National Institute for Religious Affairs, said at the time.

Leaders of Angola’s Muslim community, who make up several hundred thousand out of a population of about 18 million people, have accused the government of religious intolerance and persecution.

Two mosques were closed around the time of the reported ban in 2013, which the government said was due to a lack of necessary land titles, building licences or other official documents.

As for the most recent posts reporting a ban, it is clear that the pictures accompanying them are misleading.

One such post published in February 2019, which we’ve archived here, has been shared 26,000 times.

“Angola become the first country in the world to ban Islam. According to the Angolan government, islam is barbaric and against the laws and well being of the Angolan people. Here we witness in pictures the destruction of mosques by the government,” the caption reads. 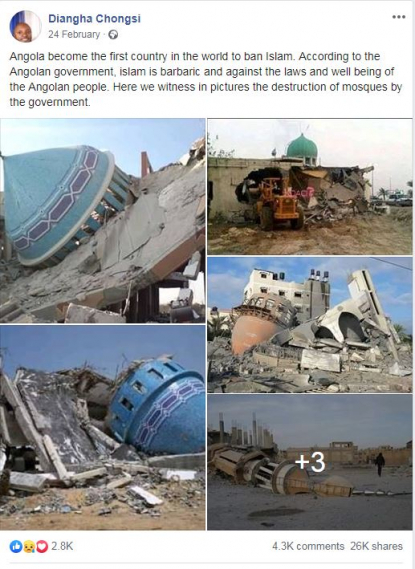 A screenshot taken on May 14, 2019 of one of the misleading Facebook posts

A second post sharing the same photos, with the same caption, was shared here in April and has since racked up 5,400 shares. 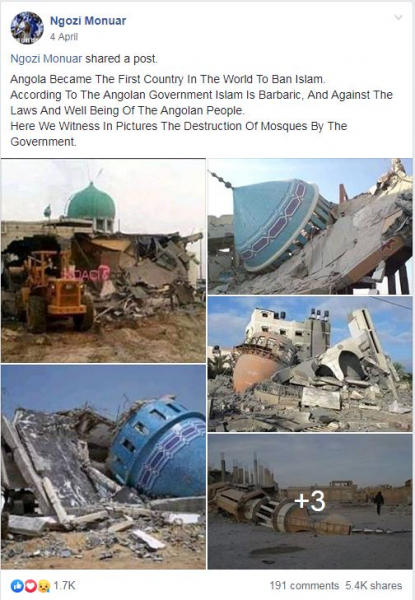 A screenshot taken on May 14, 2019 of the second misleading post

Other misleading posts have been shared here, here and here.

Let’s look at the six images used in these posts.

A reverse image search on Google shows that the first photo, showing a mosque with a green domed roof, is of a mosque in Bahrain bulldozed in 2011 during the Arab Spring. 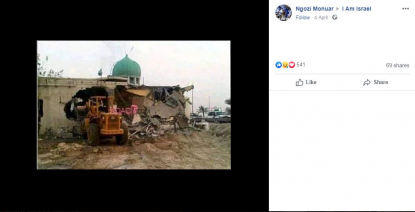 As the BBC later reported, the Amir Mohammed Mohammed Barbagi Mosque was more than 400 years old when Bahrain’s government ordered it to be bulldozed during the uprising, sending shockwaves through the island’s Shia community. 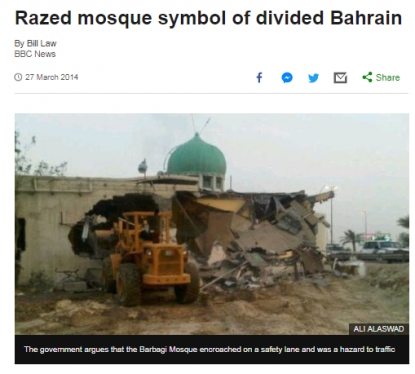 A screenshot taken on May 15, 2019 shows the same photo used on the BBC website

The second photo shows a destroyed mosque with a turquoise-domed roof. An online search located the image on Wikicommons. According to the caption, it shows the wreckage of a refugee shelter, school, and mosque that were destroyed in the Rafah area of the Gaza Strip in 2009. 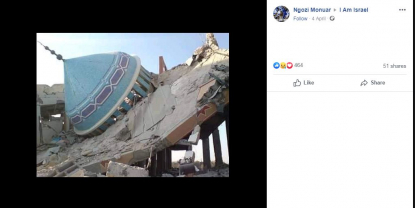 Photos from other news outlets confirmed the caption. In this photo from Getty, you can see the same mosque from a different angle. The caption says it shows “the rubble of the al-Fadilah mosque after it was destroyed by an Israeli air strike in Rafah, in the southern Gaza Strip, on Sunday, Jan. 11, 2009.” 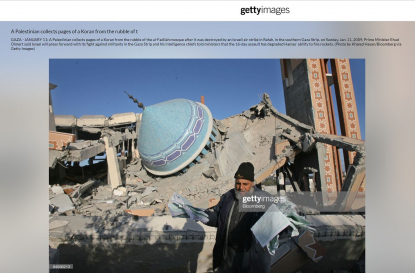 The same mosque, destroyed in Gaza in 2009, can be seen in this Getty photo

The third photo was also taken in Gaza, but this time during fighting in August 2014. 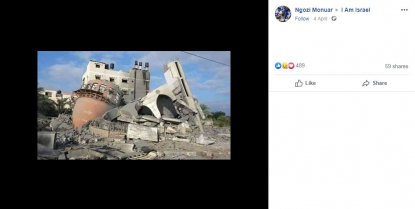 Screenshot taken on May 15, 2019 of Facebook post claiming to show a mosque destroyed in Angola due to the 'Islam ban'

You can see the same mosque, in a photograph taken from a different angle, in this article on the website of the Jerusalem Post newspaper. 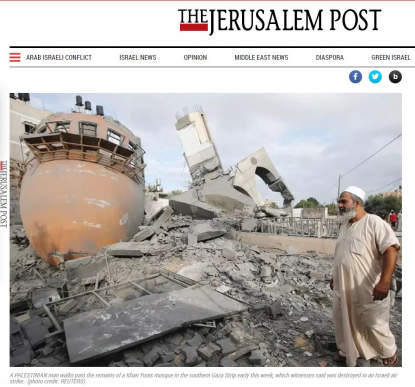 The same Gaza mosque, as seen in the Jerusalem Post

As for the fourth photo, a reverse image search on Google traced it to a post by Amnesty International which indicated that the pictured mosque was destroyed by an airstrike in the Syrian city of Raqqa in November 2014.

The London-based rights group was accusing Syrian government forces of unlawfully killing civilians in a series of aerial attacks on Raqqa at the time.

Screenshot taken on May 15, 2019 of an image of a ravaged mosque on Amnesty International's website

Finally, there are two photographs of Muslims protesting against the Angolan government. A reverse image search on Tineye showed that these two images were originally published in 2013 by the British photographer Peter Marshall on his website, My London Diary. 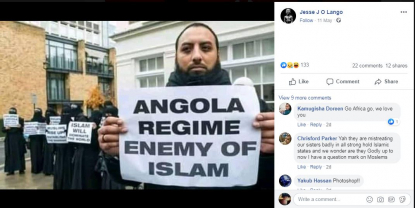 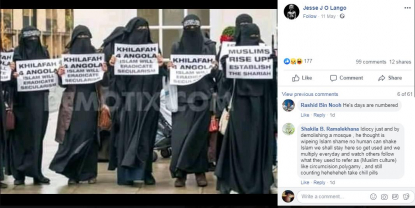 According to Marshall’s website, they were taken in November 2013, during a protest outside the Angolan embassy in London when reports of an Islam ban first emerged.

This is not the first time since 2013 that claims of Angola banning Islam in the region have re-emerged. The BBC debunked the claim in 2016 after a flurry of similar reports popped up that year in the United States.