No, this video does not show Indonesian President Joko Widodo admitting to fraud in 2019 elections

A video viewed more than half a million times on YouTube has been shared alongside a claim it shows Indonesian President Joko Widodo admitting there was fraud in the country’s 2019 elections. The claim is false; the misleading footage of Joko Widodo has been edited from a CNN video in which he does not mention election fraud.

The misleading YouTube video’s Indonesian-language caption translates as: “HE JUST CONFESSED!! Jokowi confesses there is fraud in 2019 polls, PRABOWO: thank you for being HONEST!”.

In the YouTube video, which is 11 minutes and 15 seconds in length, an Indonesian-speaking narrator can be heard speaking over the top of the video. 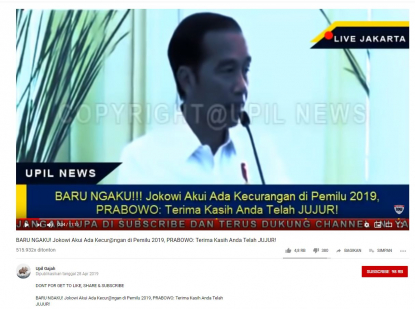 The text in the blue banner across the bottom of the screen says: “HE JUST CONFESSED!! Jokowi confesses there is fraud in 2019 polls, PRABOWO: thank you for being HONEST!”.

The misleading footage was uploaded on a YouTube account called Upil Gajah, which claims to provide “POPULAR NEWS” but does not list any links to any mainstream Indonesian media groups on their profile, which can be seen here.

A screenshot of the video was also shared on Facebook here with the same claim.

The claim is false; Widodo cannot be heard speaking in the misleading video.

The misleading footage of him has been edited from a CNN video in which he does not mention election fraud.

A reverse image search for a screenshot of the misleading video on Yandex found this video report published by CNN Indonesia on April 23, 2019, which is 1 minute and 34 seconds long.

Below is an image comparing screenshots from the CNN Indonesia video (L) and the misleading video (R). The footage is identical; AFP has circled some of the similarities in red.

The misleading footage on the right has been cropped and enlarged, and the black and white titles at the bottom of CNN’s video can’t be seen.

The similarities between these two frames from the same videos are also clear. Note the TV and flag in both the CNN video (L) and the cropped, misleading video (R ):

The Indonesian-language title of the CNN Indonesia video translates as: “Jokowi asked ministries to reduce spending on goods”.

At the 50 second mark of CNN’s video, Widodo can be heard saying in Indonesian: “We have said that capital expenditures should be strengthened and increased. All ministries should be able to force their organisations to enable budget restrictions. Spending on goods should be cut as much as possible.”

Widodo does not mention election fraud at any point in the video.