No, this photo does not show a 265-year-old man — but it does show a former contender for the ‘world’s oldest person’ title

A Facebook post that claims to show a 256-year-old Chinese man has been shared more than 82,000 times since it was published last November. In fact, it shows Luo Meizhen, a woman who died in 2013. Chinese documents stated that she was 127 years old at the time of her death which would have made her the oldest person in the world, although the claim has not been recognised internationally. The oldest human on record was 122 at the time of her death.

“This man is 256 years old , he is from China and still alive. Lets wish him many more”, reads the caption on the widely-shared Facebook post, which we’ve archived here. 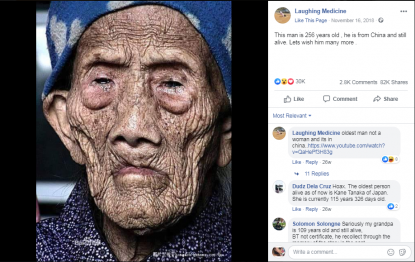 A reverse image search of the picture immediately leads to articles about Luo Meizhen’s death in 2013 and the attempt to have her recognised as the oldest person in the world.

As reported by AFP, official documents said that she was born in 1885, which would have made her 127 at the time of her death.

But the claim met with little recognition internationally because China did not have a reliable birth certification system until decades after Luo was born. Scepticism was further fuelled by reports of the youthfulness of her sons, one of whom she was said to have given birth to at the age of 61.

According to Guinness World Records, the oldest person ever to have lived was Jeanne Calment of France, who was 122 years and 164 days old when she died in 1997.

The oldest recognised man alive at the time of the post would have been Masazo Nonaka of Japan, who died in January this year at the age of 113 years and 179 days.

The oldest man to have ever lived is said to be Japan’s Jiroemon Kimura, who passed away at the age of 116 years and 54 days in 2013.

On March 9, the oldest person living today was confirmed as Kane Tanaka from Japan, according to Guinness World Records.

No, this video does not show restaurant workers in Sri Lanka washing crockery in dirty water

No, Justin Trudeau did not spend Victoria Day celebrating Ramadan at a mosque