No, Justin Trudeau did not spend Victoria Day celebrating Ramadan at a mosque

A meme claims that Justin Trudeau spent Victoria Day -- Patriots’ Day in Quebec -- celebrating Ramadan at a mosque. While the Canadian prime minister did not publicly celebrate the May holiday, there is no public evidence he celebrated Ramadan either. The photo used to support the Ramadan claim is from 2016.

Both the article and the meme use the same photo of the prime minister addressing a crowd of Muslim men as three current or former female members of government, wearing veils, look on. 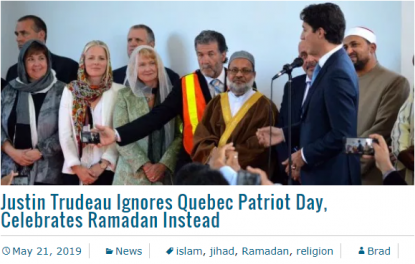 Screenshot of a headline on an online news media 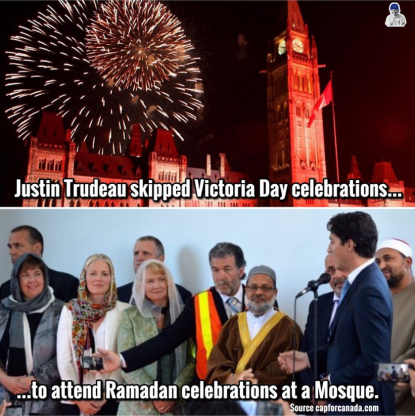 A Google reverse image search shows that the photo was originally posted on Twitter by Canadian member of parliament Anita Vandenbeld on September 12, 2016.

That day, the Liberal MP celebrated Eid al-Adha at the Ottawa Muslim Association, along with Trudeau and other members of the government. Trudeau posted a photo of the same scene from a different angle on Twitter the same day.

Eid Mubarak! My thanks to the Ottawa Muslim Association for welcoming me to Eid al-Adha celebrations today. pic.twitter.com/aksEI0mr6b

On Victoria Day 2019, which has been celebrated as Patriots' Day in Quebec since 2002, Trudeau’s only public appearances were a discussion at the Collision conference with BroadbandTV CEO Shahrzad Rafati at 6:30pm, followed by a meeting with the conference’s co-founder and CEO, Paddy Cosgrave. Videos of both events can be viewed here and here.

It is true that no official communications from Trudeau or the prime minister’s office celebrated Victoria Day or Patriots' Day in 2019, although it had been the case in some previous years.

The Muslim holy month of Ramadan, which began on May 5 this year, was mentioned in a press release from the prime minister’s office on the same day.

This is not the first time the prime minister was the target of false claims in relation to his faith. AFP has found several instances of people sharing a Halloween photo of Trudeau with the false claim that he converted to Islam.