No, this photo does not show an Indian soldier on duty in the desert of Rajasthan.

A photo has been shared thousands of times in multiple posts on Facebook and Twitter which claim it shows a female Indian soldier on duty in the state of Rajasthan. The claim is false: the photo shows Asia Ramazan Antar, a fighter in the Kurdish Women's Protection Units (YPJ) who was killed by Islamic State militants in northern Syria in 2016.

The misleading post's Hindi language caption translates to English as: “An Indian soldier on guard duty in the heat of the Rajasthan desert, victory to India.” 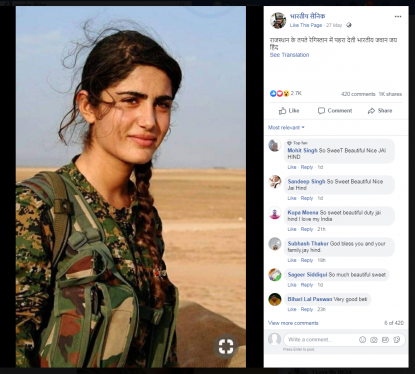 Rajasthan is a state in western India that borders Pakistan.

The claim is false: the photo actually shows Asia Ramazan Antar, a fighter in the Kurdish Women's Protection Units (YPJ) who was killed by Islamic State militants in northern Syria in 2016.

A reverse image search on Google found the same image in this BBC report published on September 12, 2016.

Below is a screenshot of the photo in the BBC report: 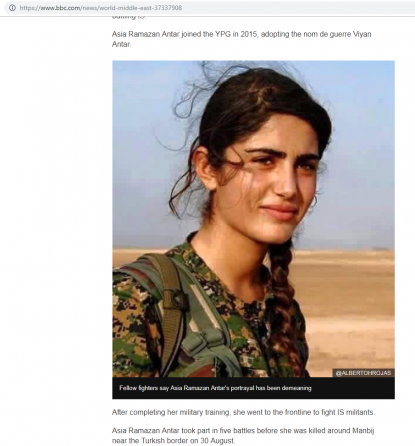 (Screenshot of the same photo included in the BBC report)

The article reports on the death of Asia Ramazan Antar, a member of the Kurdish Women's Protection Units (YPJ), in northern Syria in 2016.

The report says, in part: “She was, according to Western media, a poster-girl for her people, admired as much for her striking good looks as her military prowess.

“But for her fellow fighters, Asia Ramazan Antar's portrayal in the press and social media came as both a surprise and disappointment.

“The 19-year-old, from the Syrian Kurdish city of Qamishli, was killed by Islamic State (IS) militants in northern Syria last month.”

The same photo was found in this report about Antar’s death by The Times newspaper published on September 9, 2016.

Both the BBC and The Times reports credited the photo to “@AlbertoHRojas”.

The name corresponds with this Twitter handle for journalist Alberto Hugo Rojas.

Below is a screenshot of this photo which Rojas shared on his Facebook page on November 20, 2016, with a watermark. 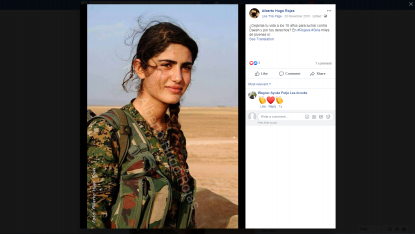 A translation of the Spanish language caption reads: “Would you leave your life at the age of 18 to fight daesh and for your rights? In #Rojava #Syria thousands of young people have.”

On May 29, 2019, Rojas told AFP on Facebook messenger that he took the photo of Antar.

In this photo tweeted by an official YPJ Twitter account on December 31, 2017, a group of YPJ fighters can be seen wearing similar uniforms to the uniform worn by Antar. 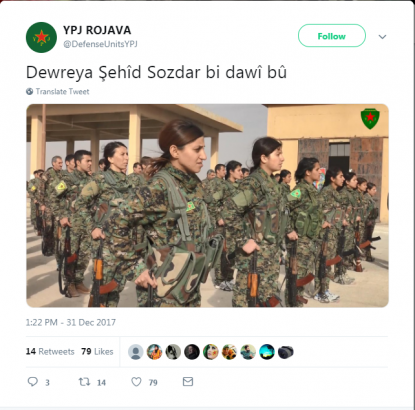