No, flu shots do not make people contagious

As Canada enters flu season, many online posts warn individuals that getting vaccinated will cause them to be contagious for several weeks. This is false; flu shots contain dead influenza viruses that are not infectious, according to the Canadian Public Health Agency (CPHA) and the US Centers for Disease Control and Prevention(CDC).

A screengrab of plain text explaining that flu shots turn people into “an active live walking virus” was shared at least one thousand times in the past week. One Facebook user added the caption: “Your the carrier. Wake up!” as a warning. 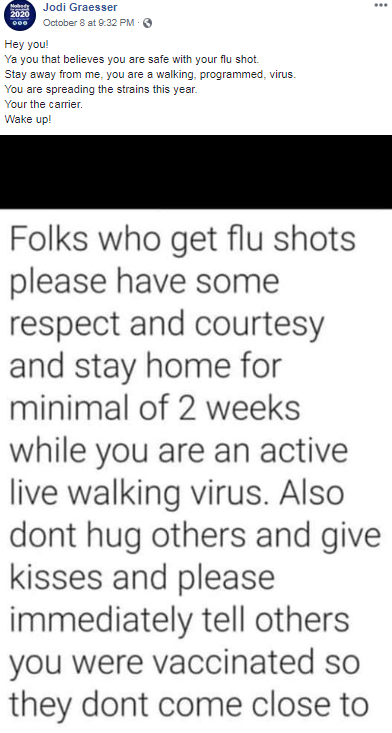 This myth is widespread enough that several health institutions explicitly debunk it on their websites, including the CPHA, the  Harvard Medical School, the CDC, and the University of California, Los Angeles health center.

“I haven’t heard of this before, but it makes no scientific sense whatsoever,” according to Dr. Ian Gemmill, former chair of Immunize Canada, a coalition of non-government health organizations.

All influenza vaccines approved in Canada this season are inactivated. “Yes the virus was live at one time but it is inactivated, which means it’s dead. It does not replicate, it has no ability to infect anybody,” Gemmill told AFP.

Some vaccines, he added, have not only been inactivated but have also been split, and sometimes even purified down to the protein needed to create the vaccine.

Once administered, the vaccine and the virus it contains stimulate immune cells that will be ready should the vaccine receiver come in contact with live flu virus.

Gemmill compared a vaccinated body to an army that is prepared and knows what the enemy looks like, allowing it to fight the virus before it can take hold. An unvaccinated person’s immune system would not react so quickly and would have to fight the enemy faction, which is the illness.

FluMist Quadrivalent is a flu vaccine that is only weakened (attenuated), rather than inactivated. Although it is licensed in Canada this year, it is not commercially available, Gemmill told AFP.

Although theoretically possible, chances are slim that a live attenuated virus would be transmitted from the patient to another individual because the dose used in a single shot is so small and the virus so weak, Gemmill said. He added that he has never seen a report of contamination caused by vaccination.

Vaccines in Canada must go through a rigorous multi-step evaluation before they can be commercialized or administered in the country, according to Health Canada.

Flu viruses are constantly changing, so, flu shots change annually; the variations in their composition are determined by the World Health Organization’s (WHO) recommendations for that year, although the composition may be maintained over multiple years. Flu vaccine composition for the entire northern hemisphere is decided by the WHO every January, and manufacturers propose new vaccines in the following months.

The flu vaccine is a regular source of misinformation. AFP Fact Check has also written about misleading posts about the ingredients in flu vaccines.