A photo of a Hong Kong government letter has been shared thousands of times in Facebook, Twitter, and online forum posts which claim it shows the Hong Kong government plans to revive a withdrawn extradition bill after a second reading in the legislature. The claim is false; the letter actually states the bill would be given a second reading on October 23, 2019 before it was formally withdrawn; John Lee, Hong Kong’s Security Secretary announced on October 23, 2019 in the legislature that the bill was withdrawn.

The letter image was published on Facebook here on October 16, 2019, and the post has been shared more than 3,500 times. In the top right-hand corner, it states it refers to legislative council paper number “CB(2)1957/18-19(01)” and was issued by “Secretary for Security” from “Government Secretariat” to Starry Lee, Chairman of the House Committee at Legislative Council.

A signature for John Lee, Hong Kong’s current Secretary for Security, can be seen in the bottom right-hand corner of the image.

The letter’s header translates to English as: “Resumption of Second Reading Debate on the Fugitive Offenders and Mutual Legal Assistance in Criminal Matters Legislation (Amendment) Bill 2019”.

The main body of the letter translates to English as: “The Chief Executive announced on 4 September 2019 that the Government would formally withdraw the Fugitive Offenders and Mutual Legal Assistance in Criminal Matters Legislation (Amendment) Bill 2019 (“the bill”) when the Legislative Council resumes business.

The second reading of the bill was suspended on July 10, 2019 after mass pro-democracy demonstrations broke out in Hong Kong, as reported here by AFP. Hong Kong’s Chief Executive Carrie Lam subsequently announced plans to withdraw the bill, which could have enabled extradition of criminal suspects from Hong Kong to mainland China, on September 6, 2019.

The bill was finally formally withdrawn at a Legislative Council meeting on October 23, as reported here by AFP.

The same image of the letter was published here and here on Twitter, and here on Hong Kong forum LIHKG with a similar claim.

The claim is false; the letter states the bill would be given a second reading on October 23 before it was formally withdrawn.

Secretary for Security John Lee announced the bill’s formal withdrawal on October 23, 2019 in the legislature.

Here is Lee’s announcement in a video published on the Legislative Council’s official YouTube channel with English audio translation. The relevant part of his speech begins at the two-minute 20 second mark until the three-minute five second mark.

The video’s English translator gives Lee’s comments as follows: “As a result of the divided views of the public regarding the bill, there have been conflicts in the society. Having studied and reviewed the matter, the administration decided to suspend the amendment exercise. For this purpose, I wrote to the President of the Legislative Council to withdraw the notice to resume the second debate reading of the bill and as a result, the Legislative Council meeting stopped handling the bill. Thereafter, the administration stated many times that the revision has come to a halt. For the purpose of spelling out clearly the position of the Special Administrative Region (SAR) government in accordance with Rule 64(2), I formally announce the withdrawal of the bill. Thank you, Mr President.”

A keyword search on the Legislative Council website found the letter in the misleading posts was published here.

Below is a screenshot comparison of the image from the misleading post (L) and the Legislative Council letter (R): 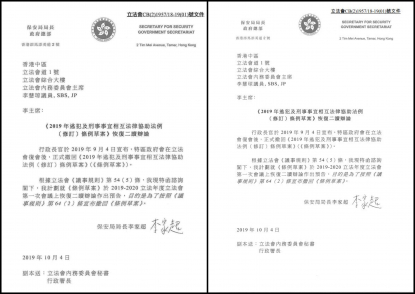 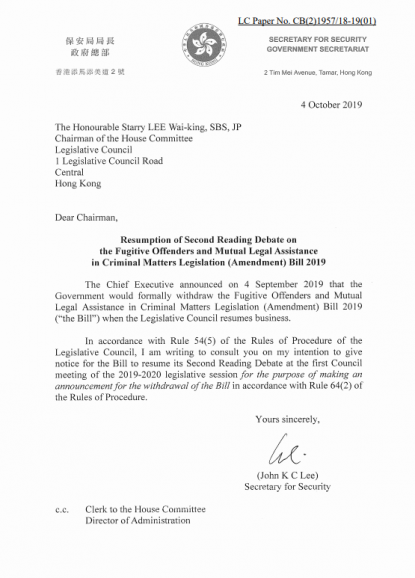 Screenshot of the English version

A bilingual journalist in AFP’s Hong Kong bureau found the English version of the letter corresponded directly with the Chinese version.