Posts claiming to show scenes from a recovery mission for a passenger vehicle carrying a woman and her child that plunged into the Indian Ocean last month have been shared multiple times on social media. But some of the images purporting to show the accident are old pictures from Kenya and other countries.

Four Facebook posts shared multiple images suggesting they were from the accident on September 29, but simple internet searches show that they are actually old pictures, in one case dating as far back as 2000. 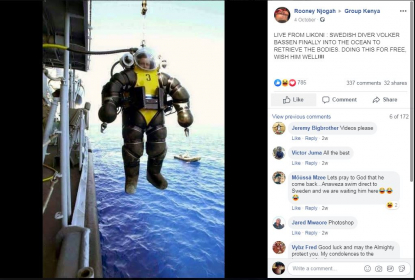 Screenshot taken on October 24, 2019 of Facebook post claiming to show diver during the recovery mission for passenger vehicle that plunged into the Indian Ocean

A picture of man wearing a diving suit being lowered into a large body of water was shared on one Facebook Page with more than two million followers. The post (archived here) claimed the man in the photo was Volker Bassen, a Swedish diver who had joined the mission according to local media reports.

“LIVE FROM LIKONI: SWEDISH DIVER VOLKER BASSEN FINALLY INTO THE OCEAN TO RETRIEVE THE BODIES. DOING THIS FOR FREE, WISH HIM WELL!!!!,” read the post,  shared over 30 times, attracting more than 1000 comments and reactions.

But a reverse image search on Google and Yandex search engines locates the picture on the Getty images website, credited the picture to the US Navy. The caption states that the man was actually an Italian diver identified as Franco Ellenico, on a training operation in the Mediterranean sea in September 2000. 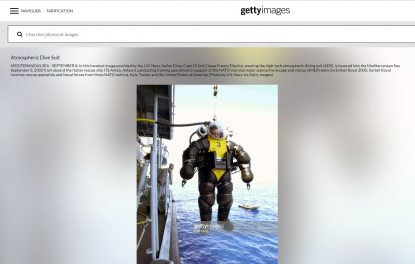 Another post shared a picture of a lorry floating in the Indian ocean at the Likoni channel. MV Likoni is written on the side of a ferry in the picture which was posted on October 20, 2019. It has the caption: “BREAKING NEWS: Likoni ferry tragedy again”. 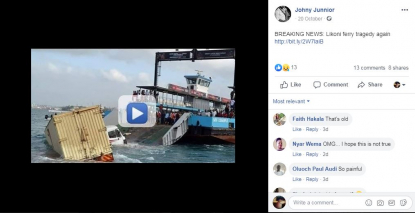 Screenshot taken on October 24, 2019, of Facebook post claiming to show a recent accident at the Likoni Ferry Channel

But that image was actually taken by AFP in 2013, when a lorry lost control and rammed into passengers boarding a ferry, leaving at least 11 dead. 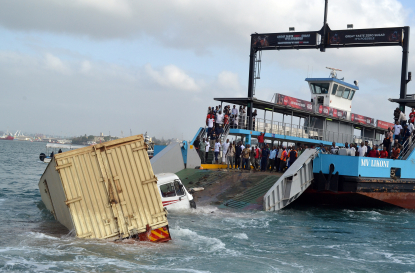 People stand on the deck of a ferry where a truck lost control and rammed into passengers boarding the boat, killing at least 11 people in Kenya's port city of Mombasa on January 26, 2013. Mombasa, some 400 kilometres (248 miles) southeast of the capital Nairobi is Kenya's main port city and a key tourist hub famed for its sandy beaches. (AFP)

Another post shares a picture of a diver being submerged and claims to show South African divers contracted to help with the recovery of the sunken vehicle. 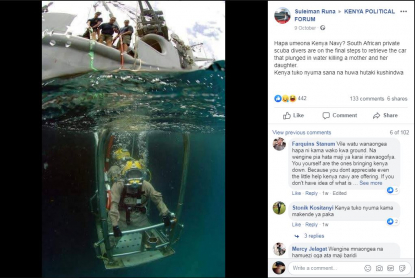 Screenshot taken on October 24, 2019, of Facebook post claiming to show South African divers at the recovery mission for a passenger vehicle off the Kenyan Coast

But a reverse image search on TinEye locates the photo on Alamy, a British stock photography agency and attributes it to the US Navy. 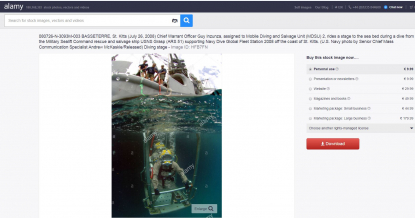 Screenshot taken on October 24, 2019, of diver's picture on Alamy's website

Another post shared 17 pictures of statues apparently found on the floor of the Indian Ocean off the Kenyan Coast by the Swedish diver involved in the rescue mission. The post was published on this Kenyan Facebook Page with over 300, 000 followers alongside the caption: “Kenyans making fan of what is under the water in Indian Ocean.....that this is what Swedish diver found while retrieving the bodies of Mariam Kagenda and her daughter Amanda”. 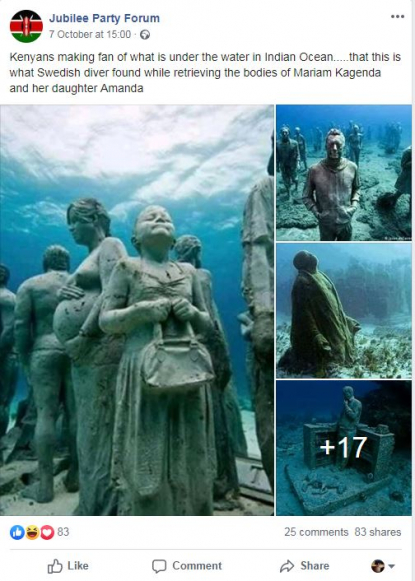 Screenshot taken on October 24, 2019, of Facebook post claiming to show statues on the floor of the Indian Ocean

But a reverse image search indicates that the sculptures are the works of British sculptor Jason deCaires Taylor. The artist told AFP that he has not placed any of his artworks off the Kenyan Coast.

“None are in Kenya, one project is in the Indian ocean in the Maldives,” Taylor said in an email.