Numerous social media posts claim that Nigeria’s former finance minister,  Ngozi Okonjo-Iweala, has been named the new director-general of the World Trade Organization (WTO). This is false; the WTO says the selection process for the top job will run until late October and Okonjo-Iweala is one of two remaining candidates. 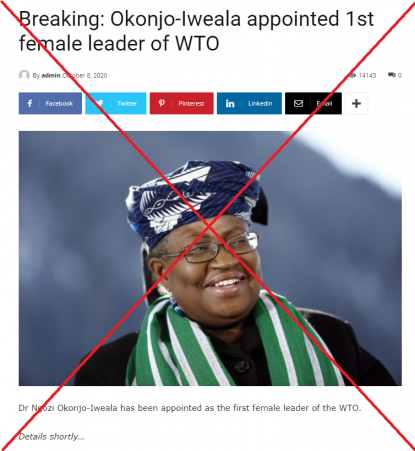 The body of the one-paragraph report claims that Okonjo-Iweala, who is also a former managing director of the World Bank, was appointed the first female head of the WTO.

More than 18,000 people have interacted with the article since it was published on October 8, 2020, according to data provided by social media monitoring tool CrowdTangle. 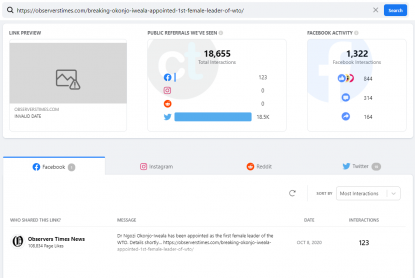 Screenshot taken on October 9, 2020, shows online interactions with the article

The Observer Times has a track-record of publishing click-bait content. AFP Fact Check previously debunked an Observer Times article which falsely claimed that an alleged kidnapper had been sentenced to death in Nigeria.

The site’s disclaimer says it does not take responsibility for publishing false information. 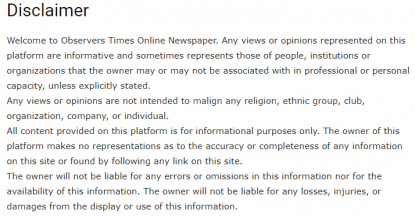 Okonjo-Iweala is lobbying to succeed current WTO head Roberto Azevêdo. As reported by AFP, the Brazilian career diplomat announced in May that he was stepping down a year before the end of his tenure for “personal” reasons.

From the original eight candidates, the race was narrowed down to five and finally two -- Okonjo-Iweala and South Korea’s Yoo Myung-hee. 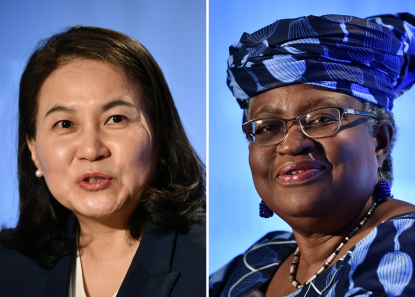 However, no winner has yet been announced.

“The race for the WTO director-general is still very much on,” reads a statement released by Okonjo-Iweala’s media aide, Paul Nwabuikwu. “Contrary to inaccurate information released online by an unidentified source, Dr Ngozi Okonjo-Iweala has not yet been declared the winner. The winner should be announced in two to three weeks.”

The remaining two contenders for the WTO top position will advance to the third and final round of consultations which will commence on October 19 and run until October 27, according to the WTO.

We are in the third phase of the process to select the next WTO Director-General. The three rounds of consultations of WTO members' preferences is designed to select the candidate most likely to attract consensus. #WTODG

Here's how the process works: pic.twitter.com/v0W1Tco5xF

Both false claims circulated on several social media platforms in Nigeria, including on Facebook, Twitter and Instagram, as well as on news sites such as ABN TV and 9NewsNG.