Skip to main content
A supporter of Bongbong Marcos holds his portrait during a rally in front of the Supreme court in Manila on October 15, 2019, as the high court is expected to handover a decision on the electoral protest by Marcos against Vice-President Leni Robredo in the 2016 vice- presidential elections. (AFP / Ted Aljibe)

A video viewed hundreds of thousands of times in multiple Facebook, TikTok and YouTube posts claims a newspaper reported that Ferdinand Marcos Jr. is the new Philippine vice president. The claim is false; the article referenced in the video does not report Marcos Jr. is new vice president, it actually reads that the Philippine Supreme Court ordered proceedings in the ongoing election dispute between Marcos Jr. and sitting Vice President Leni Robredo. 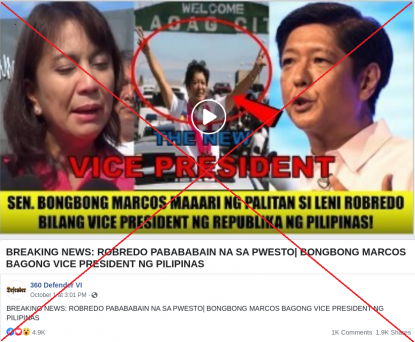 A screenshot of the misleading post, taken on October 7, 2020

The video is captioned: "BREAKING NEWS: ROBREDO TO BE REMOVED FROM OFFICE | BONGBONG MARCOS IS NEW VICE PRESIDENT OF THE PHILIPPINES"

The video begins with a Tagalog-language voiceover that states: "Bongbong Marcos is the true vice president of the Republic of the Philippines. This news just in, which immediately earned various reactions on social media. A report released by The Manila Times in its official website proves that Vice President Leni Robredo will not last long in her position as vice president of the Philippines."

The video refers to Marcos Jr. by his commonly used nickname, Bongbong.

The video then shows a screenshot of The Manila Times article, which is headlined “Leonen finally acts on Marcos protest” and was published here on September 30, 2020.

The legal challenge was filed by Marcos Jr. after he lost the 2016 vice presidential race to Robredo. Marcos Jr. claimed the election was corrupted by manipulated voting machines.

The same video was also shared alongside a similar claim on Facebook here, TikTok here, and YouTube here.

The Manila Times article referenced in the misleading video actually reports that Leonen is “finally” proceeding action on “the sleeping election protest” that Marcos Jr. filed against Robredo.

The report adds: “According to unimpeachable sources of The Manila Times in the high tribunal, Leonen, the ponente of the Marcos-Robredo poll protest, recommended a mere ‘comment’ before the Presidential Electoral Tribunal (PET) after sitting on the case for 11 months.”

Supreme Court spokesperson Brian Keith Hosaka confirmed The Manila Times’ report, and provided AFP with a copy of a September 30, 2020 press release, which states the court ordered the Philippine Commission on Elections and Office of the Solicitor General to issue comments on the case.

“That is the latest presser briefer we released on the said case,” he said in a Viber message on October 7, 2020. 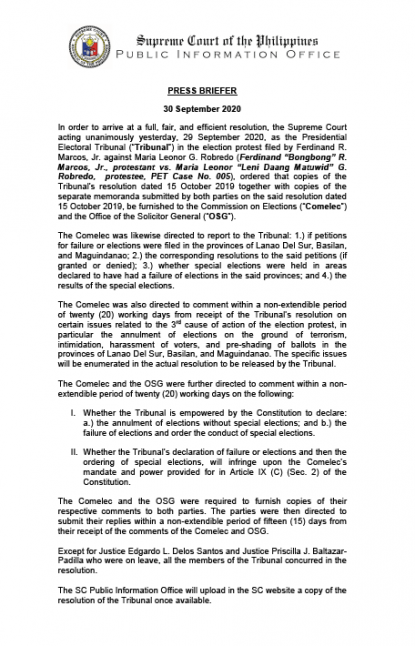 A screenshot of the Supreme Court press briefer, taken on October 7, 2020