Kenya’s Amina Mohamed has not yet been picked as new WTO boss, race is still on

A post shared multiple times on Facebook and Twitter claims that former Kenyan foreign minister Amina Mohamed is the new chief of the World Trade Organization (WTO), defeating seven other contenders. This is false; the selection process for the WTO’s top job is still on and no winning candidate has been announced yet.

Mohamed is one of eight candidates seeking to succeed current WTO head Roberto Azevêdo. As reported by AFP, the Brazilian career diplomat announced in May that he was stepping down a year before the end of his tenure for “personal” reasons.

But Mohamed is said to have already clinched the WTO top post in numerous social media posts in Nigeria, including this one published on Facebook on July 16, 2020. The Facebook page, called Foluke Daramola, has more than 280,000 followers. 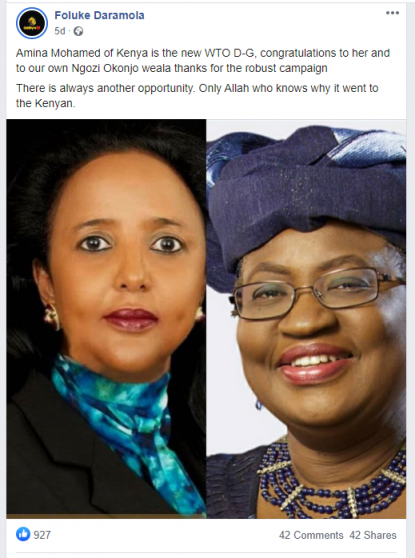 “Amina Mohamed of Kenya is the new WTO D-G, congratulations to her and to our own Ngozi Okonjo weala thanks for the robust campaign (sic),” the post partly reads. 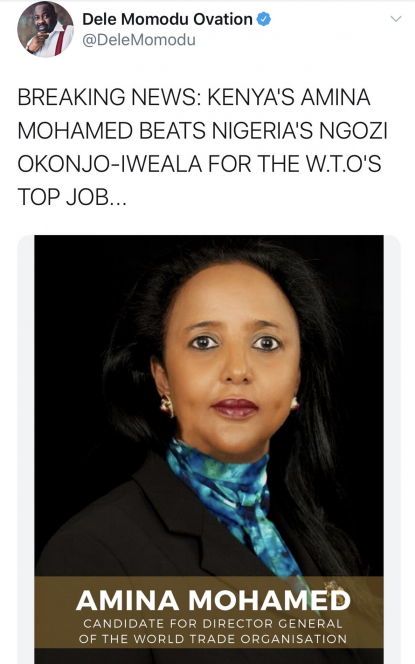 A screenshot taken on July 16, 2020, showing the misleading tweet

The tweet surfaced a few days after Kenya nominated Mohamed for the WTO chief position.

Since then, Momodu’s posts on social media have sparked a wave of misinformation across Nigeria about the WTO race.

A Facebook page called NG News Reporters -- whose posts have been debunked by AFP Fact Check here and here -- is one of the accounts that published the claim. Local online site City News also shared an article alongside a similar claim. 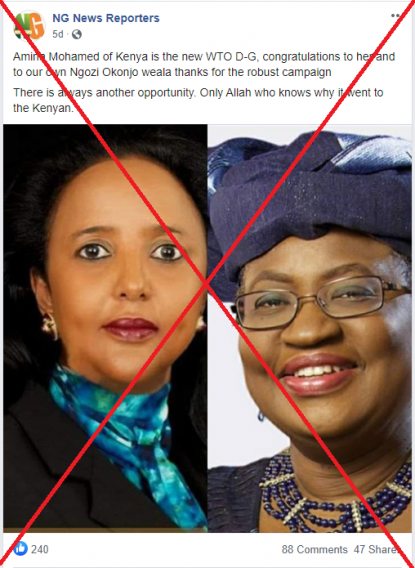 But Mohamed has not been appointed as WTO’s director-general. She’s still in the race with other contenders.

AFP Fact Check found that the WTO was in the second phase of the appointment process for its next leader after a month-long nomination stage. Candidates have until September 7, 2020, to “make themselves known to members”, according to the global trade organisation.

Consultations with WTO members to narrow the field to one candidate are the last step before the new director-general is finally named. “The third phase will last no more than two months,” the WTO stated.

Momodu issued a correction to his tweet on the same day and apologised for spreading false claims. “Just received news that AMINA MOHAMED has not been confirmed for the W.T.O job but nominated by KENYA,” Momodu said on Twitter. “The interviews are still ongoing.”

CORRECTION... Just received news that AMINA MOHAMED has not been confirmed for the W.T.O job but nominated by KENYA... The interviews are still ongoing...
"So is Nigeria. Even after NGOZI OKONJO-IWEALA'S interview the Nigerian delegation is still with Ngozi in Geneva. Very sorry. pic.twitter.com/R8NKjdxYTQ

The WTO leadership race comes amid prolonged trade tensions between the United States and China, creating an uphill task for an organisation whose goal is to foster free and predictable global trade.