This CNN broadcast has been doctored, Nigerian leader did not test positive for coronavirus

An image of a purported CNN broadcast shared thousands of times in multiple social media posts claims Nigeria's President Muhammadu Buhari and his chief of staff Abba Kyari tested positive for the novel coronavirus. But while Kyari has indeed tested positive for the virus, there is no evidence to support the claim that Buhari was infected with COVID-19. The picture of the alleged broadcast was fabricated using another screenshot of a CNN show.

The doctored image of a CNN broadcast appears in several Facebook posts in Nigeria, including on this page called “NG News Reporters”. The post has been shared more than 2,500 times since its publication on March 26, 2020. According to the post, CNN reported the Nigerian government hid Buhari’s COVID-19 test result after he tested positive for the virus alongside Kyari. Screenshot of the web publication, taken on April 6, 2020.

Visible text such as “Capitol Hill” and “8:07 PM ET” at the top right-hand corner of the viral television screenshot suggests Senator Schumer called into a CNN programme from Capitol Hill in Washington, D.C., United States.

The news report was posted alongside a video clip of CNN’s Cooper featuring Schumer on a television programme. The physical appearances of the two men and other features on the TV screen such as “Capitol Hill” show the viral image was indeed shot on a CNN broadcast at around 8:00 PM Eastern Time on Wednesday, March 18, 2020.

Comparing the time and date with the CNN program schedule, AFP confirmed that Senator Schumer was speaking on the “Anderson Cooper 360°” programme on CNN.

AFP conducted another search on Twitter for “Anderson Cooper 360°” and found the TV show’s official Twitter account. The account’s tweet feed contains key interview excerpts from the show’s previous editions, including this longer version of Cooper’s interview with Senator Schumer. The senator was speaking on the impact of coronavirus on the US.

Senate Minority Leader Chuck Schumer calls for a “Marshall Plan for our hospitals,” employment insurance and free medical treatment for anyone who contracts coronavirus. https://t.co/XyQLEGi8oN pic.twitter.com/I0Lkxvzh4s

A comparison of the two images shows the viral image has been manipulated to add a CNN Breaking News ticker, while a preview of an oncoming CNN’s show was covered with an image of Buhari and Kyari. 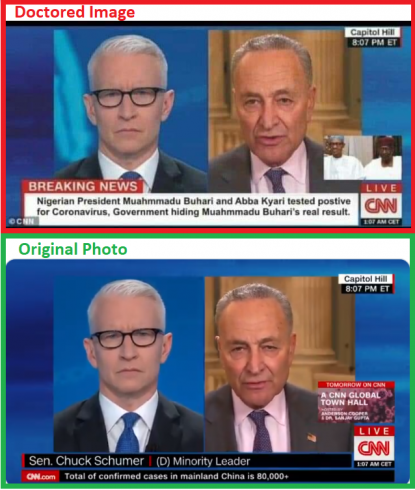 Kyari contracted COVID-19 after travelling to Germany but Buhari tested negative for the virus. The outcomes of their tests were widely covered in Nigerian media, including in this AFP report.

There is no evidence that Buhari tested positive for the virus as claimed in the viral television screenshot.

Nigeria reported the first confirmed case of the novel coronavirus in sub-Saharan Africa on February 27, 2020. Since then, the figure has risen steadily to at least 232 cases including five deaths, as of April 5, 2020.