A story that has been shared thousands of times in social media posts claims Ghana’s president and a senior minister had tested positive for COVID-19. But the claim is false;  there is no evidence to support the allegation and Ghana’s information minister has dismissed it.

The story was published on a Nigerian website called NaijaLiveTv on March 16, 2020. It has been viewed more than 16,000 times, according to a counter on the website. 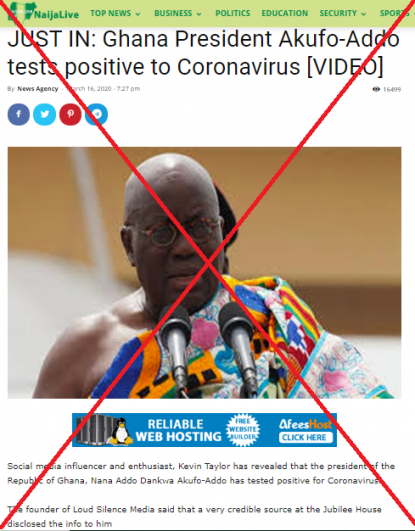 Screenshot of the misleading article, taken on March 18, 2020

The post, headlined “JUST IN: Ghana President Akufo-Addo tests positive to Coronavirus [VIDEO]”, says popular Ghanaian social media influencer Kevin Taylor made the claim based on “a very credible source” at Jubilee House -- the seat of the Ghanaian presidency.

It features an embedded tweet with footage of Taylor making the claims on his social media show, Loud Silence Radio. He alleges that Nana Akufo-Addo along with senior minister Yaw Osafo-Marfo tested positive for COVID-19 after attending the 69th birthday party of the west African country’s First Lady, Rebecca Akufo-Addo.

“Our source tells us, it’s a leak. But this has not been confirmed yet,” Taylor claims.

The 39-second video clip has been viewed more than 12,000 times since it was posted on March 15, 2020, according to data provided by Twitter.

In this longer version, the Loud Silence Radio founder challenges the president and his minister to appear in public to prove he’s tested negative for the deadly coronavirus “because Ghanaians are worried and the nation is panicking”.

The claim, however, is false; there is no evidence to support it and Akufo-Addo, meanwhile, has attended at least four public events, not to mention two telecasts, since March 15.

AFP found that the president held a meeting with the Inter-Ministerial Committee on Coronavirus response;  met with the Pharmaceutical & Banking Industries; addressed the leadership of Ghana’s Parliament; and went to a Breakfast Prayer.

Ghana’s Information Minister Kojo Oppong Nkrumah refuted the claim in a video tweeted by the ministry. “It is not true,” Nkrumah says in the footage, shot at a press conference called to address the false claim.

“We will like to encourage that if you have access to a platform, use it to encourage compliance with preventive etiquette so that we can save as many lives as possible,” he says further.

More than 240,000 cases of COVID-19 have so far been recorded globally with more than half occurring outside China where the first cases were recorded in December 2019, as AFP reported here. More than 10,000 people worldwide have died.

Ghana has a total of 11 coronavirus cases, as of March 19, 2020, an increase from its first two cases confirmed on March 12, 2020. The west African country has banned public gatherings and prohibited people who visited any country with more than 200 coronavirus cases 14 days earlier -- excluding official residents or Ghanaian citizens -- from entering the country, to curtail the spread of the pandemic. AFP reports on the pandemic here.