A claim has been shared thousands of times on Facebook that customs officials were planning to release scores of expired tinned fish into the local market. The claim is misleading; Sri Lanka authorities said the consignment referenced in the Facebook posts will not be released to the market; they said the tinned fish is currently awaiting re-exportation to the country of origin after failing to meet food safety standards.

The claim was published on Facebook here on March 18, 2020. The post has since been shared more than 1200 times. 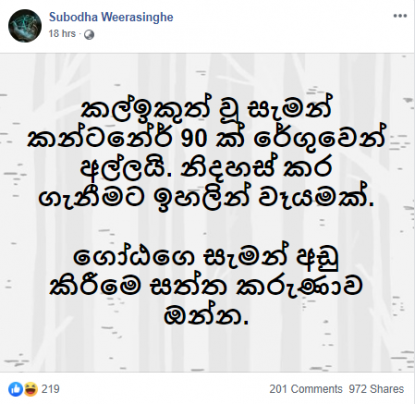 The Sinhala-language text translates to English as: “Customs raids 90 containers with expired salmon. Attempts underway to get it released. This is the reason behind Gota’s salmon kindness.”

Salmon in the local context refers to tinned fish such as mackerel, tuna or sardines.

Gota is in reference to Sri Lankan President Gotabaya Rajapaksa, who announced on March 17, 2020 that a maximum retail price for tinned fish would be enforced nationwide.

Sunil Jayarathna, Sri Lanka’s Director of Customs, dismissed the claim as “extremely misleading” and said that the 90 containers in question were not being released.

“The consignment of 90 containers in reference, was not a raid. The routine standard checks were conducted by the Food Inspectors of the Health Ministry and the Standards Institute back in March 2019,” Jayarathna told AFP by phone on March 19, 2020. “In the case of the 90 tinned fish containers, both agencies did not authorise their release.”

Jayarathna added that 33 of the containers have already been sent back to their country of origin and that the rest were waiting in port for re-exportation.

M B D Neelakanthi, the Import Inspection Director of the Sri Lanka Standards Institution, said the 90 containers of tinned fish were not released after they failed basic standard checks.

“Part of the consignment was re-exported to the country of origin while the remaining await re-exportation,” she said via phone on March 19, 2020.