A video purporting to show panic-stricken travellers infected with coronavirus disease at an airport has been shared hundreds of times on Facebook. These images are actually taken from a security exercise simulating a hostage-taking at Dakar airport in November 2019.

The video, archived here, has been shared more than 500 times since it was posted on March 7, a few days after authorities in Senegal announced the country’s first case of COVID-19.

The clip features the logo of Senegalese news site Dakaractu. The caption reads “#Urgent_coronavirus”. The footage has also been shared here and here with similar claims.

The video shows people lying on the ground coughing and shaking as firefighters rush to assist them. Later in the clip, a man lies shaking at the side of the road while others scream and run. 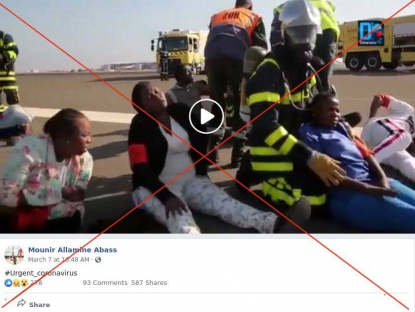 Other posts claim the panicked scenes happened in Ethiopia.

"Flight coming from Italy to Ethiopia. Everyone tested positive for corona," reads the caption on a Facebook post shared 180 times since March 22.

This led us to an article dated November 2019 published on Senegalese news site Thiesinfo.com (in French), entitled “Exercise at AIBD [Dakar airport, editor's note]: airport security in show of force ”.

According to this article, the scene shows a security exercise simulating a hostage-taking that mobilised airport personnel as well as the police and gendarmerie services.

This video was uploaded on November 28, 2019 -- the month before the novel coronavirus was detected in the Chinese city of Wuhan. The footage begins with more than a minute of raw images of this simulation, which are identical to those featured in the misleading Facebook posts.

Xavier Mary, the manager of the company in charge of operating the runway at Blaise-Diange Airport, said the “crisis management exercise” mobilised at least “a hundred actors”, according to the article.

AFP has contacted the runway firm for comment but has not yet received a reply.

There were more than 3,400 reported cases of coronavirus across Africa according to the World Health Organization (WHO) on March 30.