A video has been viewed tens of thousands of times on YouTube, Twitter and Facebook alongside a claim it shows a Belgian politician faking his Covid-19 vaccination. The claim is misleading: the video shows a trial run for coronavirus vaccinations in Belgium for which caps were intentionally left on syringes.

The post's Chinese-language caption translates to English in part as: “In order to eliminate the doubts of the public, the Belgian minister of health took the lead in injecting the coronavirus vaccine, but wait! Look closely at the video, where is the needle?!"

The eight-second video shows Bart Somers, vice minister-president of the Flemish government, purportedly receiving a Covid-19 jab. However, the video zooms in and appears to reveal the syringe is still capped. 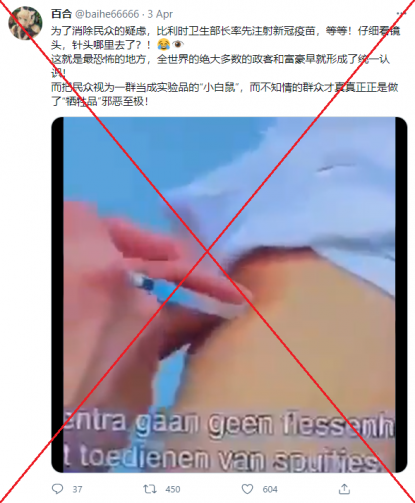 A screenshot of the misleading post taken on May 4, 2021

The same video was also viewed tens of thousands of times after it was shared alongside a similar claim here, here and here on Twitter; and here on Facebook.

The video corresponds to the 11-minute and 24-second mark of this longer report posted by the Flemish broadcaster VRT on February 1, 2021.

The report states that the video shows a trial run for Covid-19 vaccinations in Belgium.

Below is a screenshot comparison of the video in the misleading posts (L) and the VRT video (R):

The vaccination trial was also reported by the local newspaper Het Laatste Nieuws here on February 1, 2021.

The report reads in part: "Under the approving eye of Flemish Minister of Internal Administration Bart Somers, some fifty people from Bilzen and the surrounding area received their first coronavirus jab today. At least so to speak, because it was a dry run. The vaccination centre in sports hall De Kimpel was extensively tested for the first time."

The minister told AFP on February 4, 2021 that the event shown in the video was a trial and does not show a real vaccination.

“We again see the danger of fake news. This week, the trial run in several Flemish vaccination centers will start. To see if everything can go smoothly as soon as the vaccines are available, various vaccination centers are organizing a dry run. For example, they look at how long it takes to vaccinate a person and whether there are no large queues. It is irresponsible and dangerous that people use this practice moment to spread fake news.”

It reads: “To be clear: no vaccine was administered during this dry run and not even an injection was given. Otherwise I would have shouted 'Auww' louder.”

Misinformation has spread online about the vaccination of world leaders as countries began inoculating against Covid-19.