A photo shared repeatedly on Twitter and Weibo purports to show Myanmar’s army chief General Min Aung Hlaing standing on a blue stool for a group photo with foreign military officials. The posts, shared two days after Myanmar's military seized power in a bloodless coup, prompted some social media users to mock the army chief's height. But the image has been doctored from a photo of Min Aung Hlaing attending a European Union Military Committee meeting in Brussels in 2016.

The image was published here on Weibo on February 3, 2021. 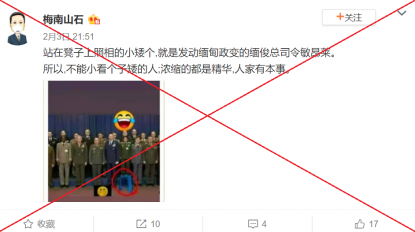 Screenshot captured on February 4, 2021, of the misleading Weibo post

“Standing on the stool for the photo, the short man is the commander-in-chief of the Burmese army, Min Aung Hlaing, who launched Myanmar’s coup,” the Chinese-language caption reads.

International and local observers -- as well as Myanmar's own election monitor -- reported no major issues that might have affected the integrity of the vote.

The image was also posted alongside a similar claim here, here and here on Twitter.

Comments from social media on the posts suggested they were misled by the image, while others suggested it may have been doctored.

“Incredible! Compared with the white general on the left (1.95m-2m by sight), the Burmese coup general is definitely no more than 1.4m. It's impossible for him to carry rifles,” one Chinese-language comment read.

Screenshot captured on February 4, 2021, of the two comments

In fact, the image has been doctored.

A reverse image search on Google, followed by a keyword search, found a similar photo published here on Facebook on November 9, 2016, by Myanmar news website The Irrawaddy.

Below is a screenshot comparison of the image in the misleading Weibo post (L) and the photo published by The Irrawaddy (R): 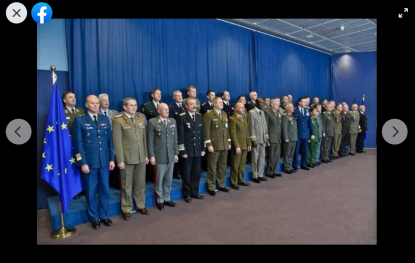 Screenshot captured on February 4, 2021, of another photo posted by The Irrawaddy

Both photos clearly show Min Aung Hlaing posed for the photo without a stool.

The Irrawaddy also published this article with one of the photos from the Facebook post. It is captioned: “The European Union Military Committee meeting in Brussels, Belgium.”

In 2016, Min Aung Hlaing was a guest speaker at the meeting between EU defence chiefs in Brussels held between November 7 and 8, according to a statement by the European Union External Action.

“He explained to the Committee the defence landscape and the military efforts for democracy in his country,” it said.