A video showing crowds running after a police truck and a convoy on patrol has been shared hundreds of times in social media posts purporting to show clashes during Nigeria’s recent election in Edo state. The claim is false: the footage actually shows two clips -- one filmed in Ivory Coast and another in Nigeria during a patrol ahead of the poll.

The governorship election in Nigeria’s southern Edo state may be over but social media platforms are still filled with numerous false claims that circulated in the lead-up to the poll held on September 19, 2020.

Notably, they included the footage in this Facebook post, which purportedly shows Nigerian police officers running for safety after spotting a large crowd heading towards them. “Heavy war: Live Video from Benin city in Edo state. As policemen on the run (sic),” reads the caption on the Facebook post. It has been shared more than 1,300 times since it was published on September 19, 2020, the same day as the local election, which re-elected Governor Godwin Obaseki.

The 30-second footage merges two separate clips. The first 15 seconds show a mob, with a text below the video claiming it shows tensions in Benin, the capital of Edo state.

A similar claim on Facebook, archived here, said the clip was shot in Owerri in Nigeria’s southern Imo state.

The second part of the video shows a convoy of security forces blaring sirens as they make a U-turn on a dual carriageway.

But AFP Fact Check found the claims to be false. While one of the videos has been shared in a misleading context, there is no evidence that any of the clips show recent violence in Nigeria’s Edo state.

A close inspection of the inscription on the black police van and the language spoken in the first part of the viral video gave AFP Fact Check clues to where it was filmed. 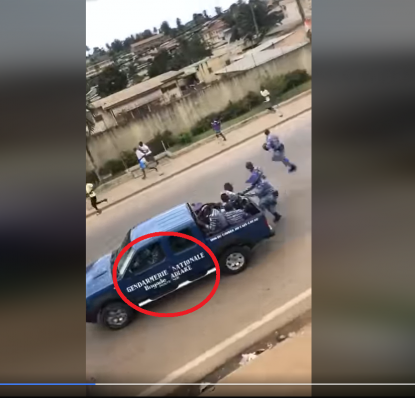 The inscriptions on the police van purportedly being chased by crowds read “Gendarmerie Nationale” and “Brigade Adiake”.

“Gendarmerie Nationale” translates as the National Gendarmerie -- one of the two national police forces of France --, while “Brigade Adiake” means Adiake Brigade.

Adiake is an area in southeastern Ivory Coast. Like in France and other former French colonies, the Gendarmerie Nationale is the name of one of the security forces in the West African country.

The video’s French caption translates as: “Tense situation in #Bonoua where the security forces are targeted by the people who have come out to demonstrate against the candidacy of Ivorian President Alassane.”

“This is Benin the Edo state capital today: Is this election or war?,” the caption reads.

AFP Fact Check confirmed the video was indeed shot in Benin during a tour by security operatives ahead of the poll. However, it does not depict electoral violence in the city.

The logo of Nigerian Zenith Bank can be seen in the footage (at 20’’). The addresses of the bank’s Benin branches led AFP Fact Check to the exact location where the video was filmed on Google Maps.

Buildings, the shape of the road and other physical features in the viral video can be seen on the Google Maps Street View.

Nigerian news site Premium Times reported that thousands of police, military and other security personnel deployed to Edo went on a “show of force” on September 17, 2020, to dissuade unrest ahead of the governorship poll.

AFP Fact Check has already debunked numerous false online claims about the Edo election, including footage purporting to show a "war" brewing in the state prior to the election, and an image purportedly showing a former chairman of Nigeria’s ruling political party voting for a rival.