These drugs are COVID-19 treatments, not vaccines, and they are available in Western countries

Photos of alleged Covid-19 “vaccines” are being shared on social media with claims that the drugs are not for sale in the US, Canada, and the European Union because they are unsafe and still undergoing testing in developing countries. This is false: these products are not vaccines. They are generic forms of remdesivir, an anti-viral drug recommended for the treatment of Covid-19 and which is sold under a different name in developed markets.

An image of two different medications -- Jubi-R and Covifor -- are included in the post with product guidelines clearly prohibiting their distribution in North America and the European Union.

“And you still argue that they mean well for the Covid19 vaccine in Africa,” reads the image text. “Wake up! Why should a medication be just for a particular region?”.

A final line at the bottom of the image reads: “Wake up Afrika, this is not a cure but a trap to kill you or use you as ‘Laboratory rats’(sic).” 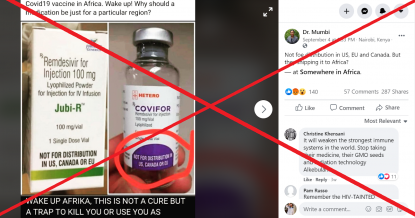 Many Facebook users were angry at what they perceived to be selective distribution to the detriment of Africans.

“Where are the brilliant medical scientists & doctors of Africa?” commented one Facebook user. “Let them make & create their own for their own people & not depend on the outsiders.” Another wrote: “We refuse to be used as rats or guinea pigs.” Screenshot of comments below misleading post, taken on September, 28, 2020

Since the emergence of the novel coronavirus virus in December 2019, rumours about vaccines being tested on African populations have sparked conspiracies on social media.

Apprehension towards the vaccine reached its peak after two French doctors discussed the benefits of testing vaccines on Africans during a televised interview in April, 2020.

The pair later apologised for their offence -- but this did little to calm allegations that Africans were being manipulated or even used as guinea pigs. AFP Fact Check reported on how it fuelled mistrust of Western vaccines.

These are not vaccines

The two products shared as an image in the posts are not vaccines.

While dozens of trials are in development, no Covid-19 vaccine has been approved yet. The World Health Organization (WHO) said it did not expect widespread immunisation against the novel coronavirus until mid-2021.

Jubi-R and Covifor are both generic drugs made with the molecule found in remdesivir, an antiviral drug developed and patented by the American laboratory Gilead Sciences.

Following a large clinical trial, remdesivir -- the drug initially used to treat the Ebola virus -- proved to be effective in patients with Covid-19.

Tested on more than 1,063 patients with Covid-19, the trial showed that they recovered on average four days faster than others.

However, according to the WHO, “there are insufficient data to recommend either for or against the use of remdesivir in patients with mild or moderate Covid-19.”

Remdesivir in the US and Europe

Washington announced in July that it had purchased 92 percent of all remdesivir production by the Gilead laboratory until the end of September -- about 500,000 treatments out of nearly 550,000.

Each treatment requires 6.25 vials on average.

The same month, the European Commission signed a contract with the pharmaceutical company Gilead to secure treatment doses of Veklury, the brand name for remdesivir.

Under the name Veklury, remdesivir was the first medicine authorised by the EU to treat Covid-19.

The decision to authorise its use was given in record time -- only a week after the European Medicine Agency’s (EMA) recommendation -- against the 67 days it usually takes.

“We appreciate the European Medicines Agency’s rapid review of remdesivir in recognition of the unprecedented nature of this pandemic,” said Merdad Parsey, Gilead’s chief medical officer.

In July, EMA announced it had placed an order of 30,000 doses with  Gilead for an amount of 63 million euros.

Canada also announced an agreement with Gilead Sciences and McKesson Canada to obtain up to 150,000 vials of remdesivir, sold under the name Veklury. 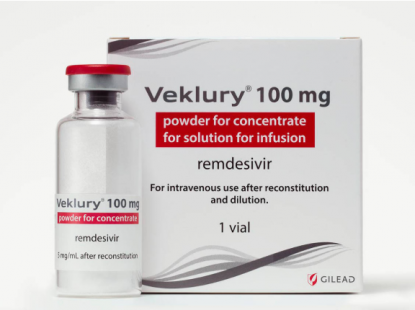 The price set by Gilead for developing countries remains high: $390 per vial, or $2,340 US dollars for a treatment using six vials in five days.

Licence for generics in developing countries

This royalty-free agreement allows these countries to manufacture remdesivir for distribution in 127 countries in Africa, Asia, the Caribbean, the Pacific and also Europe.

“The countries consist of nearly all low-income and lower-middle income countries, as well as several upper-middle- and high-income countries that face significant obstacles to healthcare access,” Gilead said.

Jubi-R and Covifor were developed within this framework by two Indian pharmaceutical groups: Jubilant Generics and Hetero Healthcare.

And according to local media, Indian drugmaker Cipla Ltd will price its generic version of remdesivir for use in Covid-19 patients at less than 5,000 rupees ($66).

Hetero Healthcare told AFP Fact Check that the label specified where Covifor could not be sold  “in accordance with the anti-diversion clause but also to safeguard the product against black-market practices”.

“As per the government's instructions, the product is only for restricted emergency use to treat the patients hospitalised with severe coronavirus disease symptoms and is made available only at hospital pharmacies," company spokesman Jeyasingh Balakrishnan said.

“It is a general mandate to put these details on the product.”

Gilead and Jubilant Generics failed to respond to questions.

However, Jubilant states on its website that Jubi-R is distributed in 127 countries and covered under the licence of Gilead, while remdesivir is “authorised and approved” for treatment of hospitalised patients with severe Covid-19 symptoms subject to regulatory approvals in Europe, US, Japan and India.

Hetero Healthcare’s website indicates it is common to find stipulations on their packaging that certain products are for use in India only, and not for export, as is the case with Covifor. AFP Fact Check found the same distribution limitations applicable to Covifor on a specialist pharmaceutical website discussing the sale of the drug in the Dominican Republic. 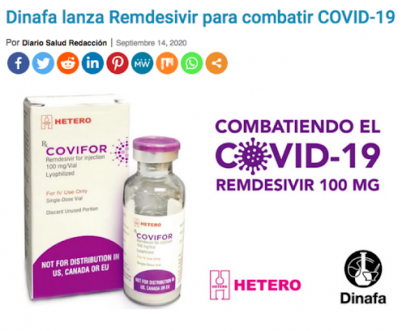 Another search for Jubi-R revealed its labelling also specifies “For India only”.

The same goes for the generic version of remdesivir, manufactured by Egyptian pharmaceutical company Eva Pharma and only available in that country. 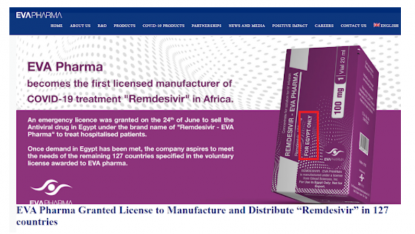 These restrictions are based on financial regulations, licences and marketing laws and do not refer to the experimental use of the drug, as claimed in the social media posts.