A video has been viewed more than a million times after being shared in multiple posts on Facebook, YouTube and Twitter alongside a claim it shows a drone delivering a box of instant noodles before collecting a card payment. The claim is false; the video is actually an animation created by a Nigerian visual effects artist.

The video was published on August 28, 2020, here on Facebook. It has been viewed more than 1.2 million times.

It purports to show a drone delivering a box of Indomie instant noodles before collecting a card payment.

Its caption, written in traditional Chinese characters, translates to English as: “The era of unmanned aerial vehicle transportation and card swiping is approaching.” 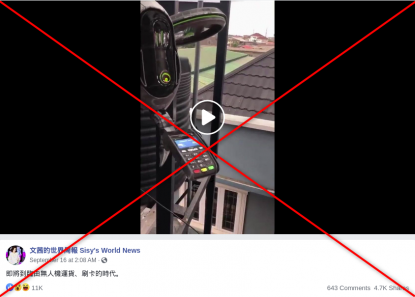 Facebook posts, such as this one and this one, also shared the video along with a claim in English that it was taken in Nigeria.

The claim, however, is false; the video is actually a 3D visual effects animation.

The Twitter user, Uche Anisiuba, describes himself as a co-founder of a Nigerian content production company, Quadron Studios.

The Twitter post’s caption reads: “So I ran out of Indomie yesterday, needed to make a quick restock, never knew we had a drone delivery service in Lagos,” followed by a laughing emoji. 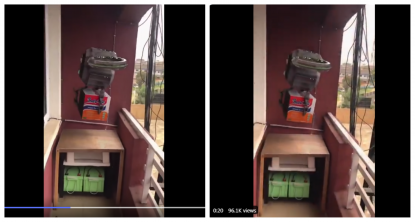 In response to a question about the clip on Twitter, Anisiuba said that the video was a “3d visual effects. Like the type they use in Avengers.”

He later tweeted this footage, which compares the video before and after the special effects.

I hear some people have been energetically arguing if this is real or not. Let me help you out. Here is a before and after ?. Sorry, not sorry ? pic.twitter.com/sUapRMTftl

Anisiuba explained in detail how he created the animation in this video on the YouTube channel of Artfrocentric.com, an online platform that showcases African digital arts.