Skip to main content
Former Philippine president Gloria Arroyo gestures at the centre stage of the plenary hall as she attempts to grab the leadership at thew House of Representatives before Philippine President Rodrigo Duterte's state of the nation address at Congress in Manila on July 23, 2018. (AFP / Noel Celis)

A photo collage shared hundreds of times purports to compare the state of health of former Philippine President Gloria Arroyo during the terms of her successors, Benigno Aquino III and Rodrigo Duterte. One photo in the collage has been shared in a misleading context; it was in fact taken during Arroyo's own term, not Duterte's as claimed.

The collage has been shared more than 200 times after being posted on Facebook here on September 10, 2020.

The collage's top photo shows a sickly Arroyo, in a wheelchair and wearing a neck brace. Its text overlay reads: “PRESIDENT AQUINO”.

Meanwhile, the bottom photo shows a healthy Arroyo surfing, and is overlaid with text that states: “PRESIDENT DUTERTE”. 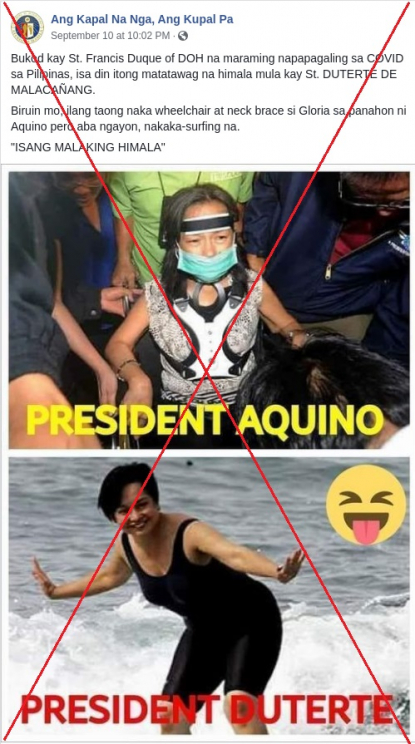 A screenshot of the misleading post, taken on September 25, 2020

The post’s caption states: "Besides St. Francis Duque of DOH who has cured a lot of COVID patients in the Philippines, here's another miracle, from St. DUTERTE OF MALACAÑANG. / Can you believe, for several years Gloria was in a wheelchair and was wearing a neck brace during the time of Aquino, but she goes surfing now. / 'A HUGE MIRACLE'".

Arroyo was jailed in 2011 during the Aquino III administration. She was detained in a military hospital and appeared in poor health, wearing a neck brace in court appearances for what doctors said was a spinal condition. In 2016, the Supreme Court threw out her corruption case in the early days of the Duterte administration.

An identical collage alongside a similar claim was also shared here on Facebook and here on 9GAG.

But the bottom photo in the collage has been shared in a misleading context.

Reverse image and keyword searches on Google traced the photo to a handout photo released by the office of the president in 2005 during Arroyo’s term, not Duterte’s.

The photo can be viewed on AFP Forum here and is captioned: “Philippine president Gloria Arroyo attempts to ride a surfboard at a surfing camp in the town of San Juan, La Union province, 27 December 2005. Arroyo is currently on holiday as she takes a rest from from political fighting in Manila.”

Below is a screenshot comparison showing the photo in the misleading posts (L) and the 2005 photo (R):

The same photo with the correct caption also appears in this 2005 report by the Chinese newspaper China Daily.

The top photo in the collage was indeed taken during the Aquino III administration. It was taken by AFP and can be viewed on AFP Forum here.

Its caption states: “Former Philippine President and congresswoman Gloria Arroyo (C) arrives at the Manila International Airport in Manila on November 15, 2011…  President Benigno Aquino's administration defied a Supreme Court ruling that Arroyo should be allowed to seek medical treatment abroad immediately for what the 64-year-old has said is a life-threatening bone disease.”

The misleading claim was also debunked here by the fact-checking arm of Rappler, a Philippine news organisation.