This video actually shows cashew-shaped biscuits being made

A video has been viewed tens of thousands of times in multiple posts on Facebook and Twitter alongside a claim it shows fake cashew nuts made from flour and various chemicals in the southern Indian state of Kerala. This claim is misleading; the video mirrors other clips showing the production of cashew-shaped crackers.

The one-minute video shows cashew shapes cut from a flattened dough. A voice, speaking in Malayalam, a language native to the south Indian state of Kerala, says: “You may have seen people sell cheap cashew nuts on the highway. You can see this during the festive time. These cashew nuts are fake and made of substandard flour, and eating these fake cashew nuts can cause cancers and ulcers.” 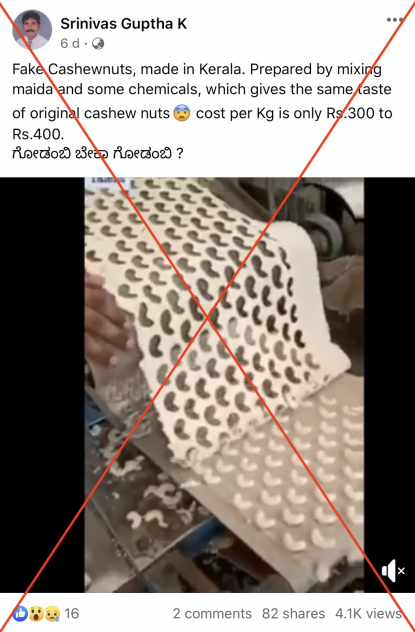 The post’s caption reads: “Fake Cashew Nuts, made in Kerala. Prepared by mixing maida and some chemicals, which gives the same taste of original cashew nuts, cost per Kg is only Rs.300 to Rs.400.”

Maida is a type of wheat flour commonly used in Indian breadmaking.

Several Twitter users commented on the misleading tweet, saying that it appears to show the production of cashew shaped crackers, not nuts.

One wrote: “These aren’t fake cashews. These are biscuits shaped like cashews. That’s a sheet of rolled dough passing through the stencil which cuts the it into cashews. Looks like a small scale, local business. You can’t replicate the colour, feel, texture and taste of cashew so easily.” 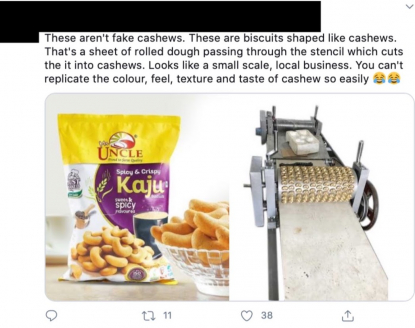 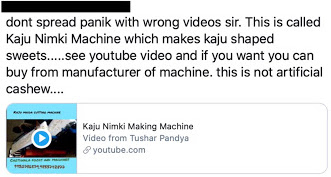 The video, published on the YouTube channel of Tushar Pandya, which describes itself as a “leading Snacks Foods Machinery Manufacturing Company Situated in Mumbai, India”,  appears to show the same cashew shapes being rolled out from a thin dough, as seen in the misleading tweet.

Kaju biscuits are a savoury cracker, often shaped like a cashew nut.

Below is a screenshot comparison between the video in the misleading tweet (L) and the 2019 YouTube video (R):

Videos showing similar machinery could also be found here on Twitter and here on YouTube; both are described as “maida kaju making machines”.