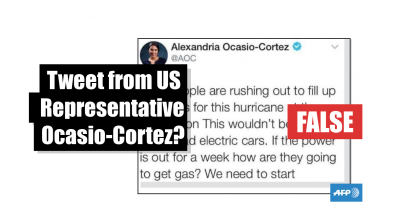 Published on Friday 6 September 2019 at 14:44
As the United States prepared for its first major storm of the 2019 hurricane season, social media posts shared a screenshot of a seemingly viral tweet from New York Congresswoman Alexandria Ocasio-Cortez about electric cars being useful in the aftermath of a storm. The tweet is fabricated. There is no record of the tweet on the Democratic lawmaker’s Twitter account or in a database which tracks tweets deleted by US legislators. The Congresswoman denied tweeting the statement.
Read more 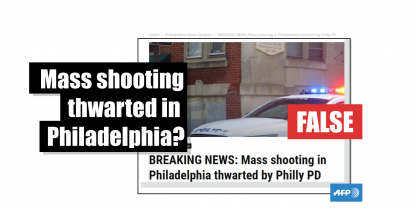 Published on Friday 23 August 2019 at 17:58
A series of nearly identical articles claim that police have thwarted a mass shooting in several US cities, including Philadelphia, Omaha, Nebraska and Wichita, Kansas. These articles are false. Police in the cities say that they’ve made no such arrests.
Read more 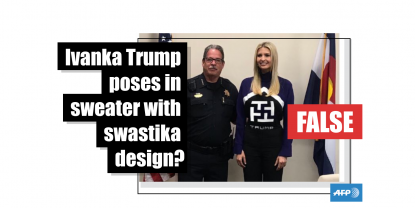 Published on Friday 16 August 2019 at 05:30
Social media posts claim to show US President Donald Trump’s daughter Ivanka wearing a purple sweater featuring a Trump logo that resembles a swastika. The image is doctored. The logo digitally added to her sweater was originally created as protest art by graphic designers in 2016.
Read more 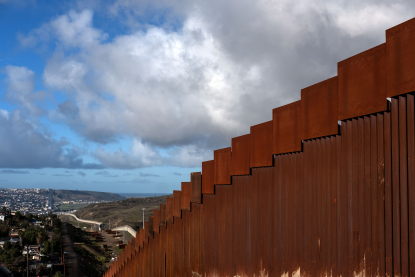 Published on Wednesday 31 July 2019 at 18:18
A Facebook post shared tens of thousands of times recounts a $5-million fine levied against the Golden State Fence Company for hiring employees who were not legally allowed to work in the United States. The company was fined by the government, but the hiring infractions date back to 1999 and the fine was handed down in 2006, years prior to US President Donald Trump’s campaign to build a wall along the US-Mexico border.
Read more 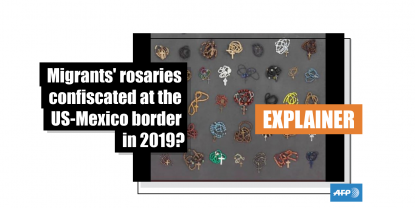 Published on Friday 12 July 2019 at 21:48
A photo of rosaries confiscated from migrants and discarded by the US Customs and Border Patrol (CBP) continues to be shared in posts on social media in June 2019, almost four years after it was captured. Photographer Tom Kiefer told AFP he took the image in July 2015 after having worked as a janitor at a CBP processing facility in Arizona until 2014. Current CBP policy states migrants’ personal property should be returned to them after they leave a CBP facility. But representatives from an NGO working at the US southern border told AFP that detained migrants continue to report some personal items confiscated by the authorities have never been returned to them.
Read more