Skip to main content
An elector signs her ballot as the Electoral College votes for president of the United States on December 14, 2020 at the state capitol in Lansing, Michigan (AFP / POOL / Carlos Osorio)

Map does not show ‘actual results’ of 2020 US election

A map claiming to show “actual results” of the 2020 US election with Donald Trump as the winner has been shared thousands of times on social media. This is false; Democrat Joe Biden has secured more than the 270 electoral votes needed to win the presidency.

“This is the actual results of the election. People in Germany saw this before Dominion servers were seized,” claims a Facebook post that has been shared 1,500 times since December 8, 2020. It has also been shared in German on Twitter. 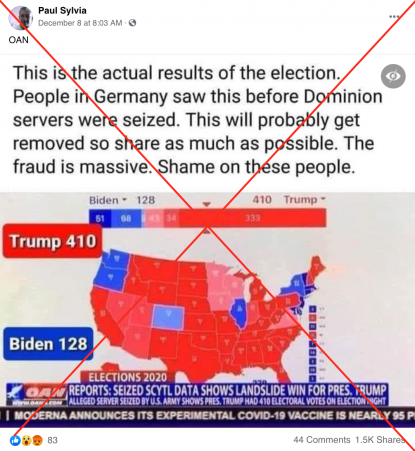 The map is attributed to the One America News Network (OAN), which has been consistently positive in its coverage of Trump and his administration, and shows 440 electoral votes for Trump and 128 for Biden.

It appears to have aired in mid-November, and suggests that the Republican party candidate won most of the electoral votes, which is false. An accurate map of the results of the November 3 election shows that the Democrat candidate won, as seen here: 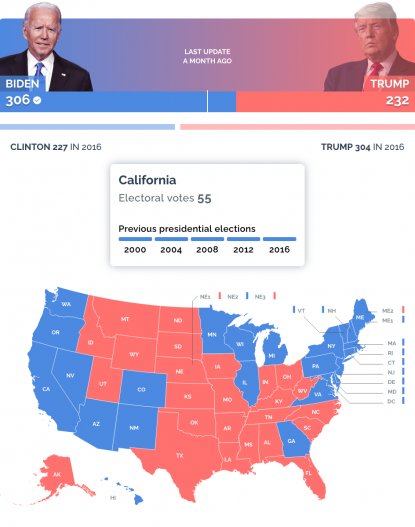 Screenshot of an interactive electoral map taken from interactive.afp.com on December 15, 2020

All 50 states and the District of Columbia have certified their November presidential election results, and the Electoral College affirmed Biden’s win on December 14, 2020.

State-by-state results of the Electoral College vote can be found here.

The post also falsely claims that Dominion Voting servers were seized in Germany. AFP debunked this claim here, with German authorities, the company and the US Army denying that any such operation took place.

Dominion Voting, which specializes in election technology and was used in multiple states during the US election, has been at the center of baseless theories promoted by Trump and his supporters.

The Trump team filed numerous unsuccessful lawsuits trying to invalidate the results of the November vote, including in Nevada and Pennsylvania.

AFP Fact Check has debunked many other false and misleading claims of purported electoral fraud in the 2020 US election here.