A video has been viewed tens of thousands of times on YouTube, Facebook and various blogs alongside a claim it shows a "breaking news" report that aired on December 13, 2020 about 10,000 rebels of the New People’s Army (NPA), the armed wing of the Communist Party of the Philippines, surrendering to the Philippine Army. However, the claim is misleading: the video actually shows a section of a speech by President Rodrigo Duterte to “former rebels” in January 2020. The Philippine Armed Forces also told AFP that a total “7,615 fighters, militias, propagandists, and underground organization members” surrendered to the military in 2020.

The video’s Tagalog-language title translates to English as: "BREAKING NEWS TODAY DECEMBER 13, 2020 PRES. DUTERTE HAS MADE THOUSANDS OF N P A SURRENDER ! WATCH!"

Text on the video claims the number of supposed surrenderees is “10,000”.

“NPA” is the acronym of the New People’s Army, the armed wing of the Communist Party of the Philippines. A screenshot of the misleading post, taken on December 15, 2020

The video circulated online a day after the Philippine military announced some 300 NPA members had surrendered to the military in the northern Philippines.

The video has also been shared here, here, here on Facebook, and on this blog, alongside similar claims.

Below is a screenshot comparison of keyframes from the video in the misleading posts (L) and the January 2020 YouTube video (R): 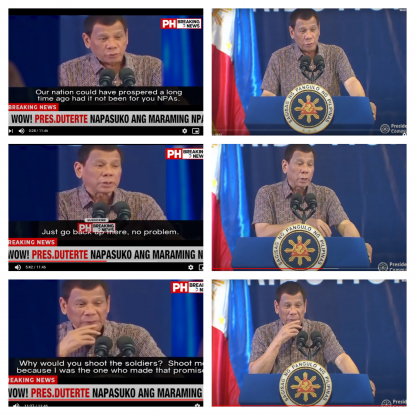 In response to the misleading posts, the Philippine Armed Forces directed AFP to a press release dated December 12, 2020.

The statement reads, in part: “A total of 201 members of the communist terrorist group New People's Army fall [sic] in relentless internal security operations so far this year.

“Information collected from military units on the ground also report that 7,615 fighters, militias, propagandists, and underground organization members and supporters have returned to the fold of law.”