A photo of flooding at a national monument in the eastern Pakistani city of Lahore has been shared hundreds of times in multiple posts on Facebook and Twitter days ahead of a planned political opposition rally in the venue in December 2020. The photo was circulated alongside a claim the Pakistan government flooded the venue with water in order to prevent the rally from being held there. The claim is false: the photo has circulated online since at least 2019, when Lahore was hit by heavy rain during the monsoon season.

The photo was published on Facebook here on December 8, 2020. It shows flooding around Lahore’s Minar-e-Pakistan monument. The post has been shared 220 times. 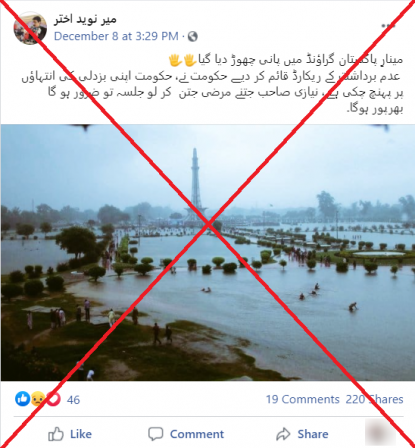 The post’s Urdu-language caption translates to English as: “Minar-e-Pakistan (Tower of Pakistan) ground has been flooded. The government has set records of intolerance. Government has reached the extremes of its cowardice. Mr Niazi (PM Imran Khan) do whatever you want to do, the rally will be definitely held and it will be befitting.”

The post circulated days before the Pakistan Democratic Movement (PDM), a major coalition of opposition political parties, held a rally at the Minar-e-Pakistan monument on December 13, 2020, as Pakistani newspaper Dawn reported here and here.

Below is a screenshot comparison of the photo published in the newspaper in July 2019 (L) and the photo in misleading post (R):

An opposition rally was held at the same venue on Dec 13, 2020, this AFP photo shows. No flooding was reported on that day. 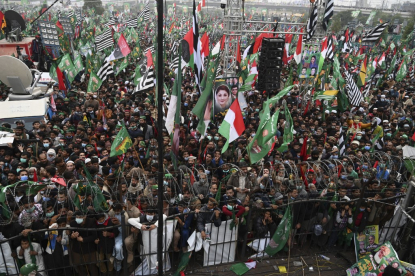