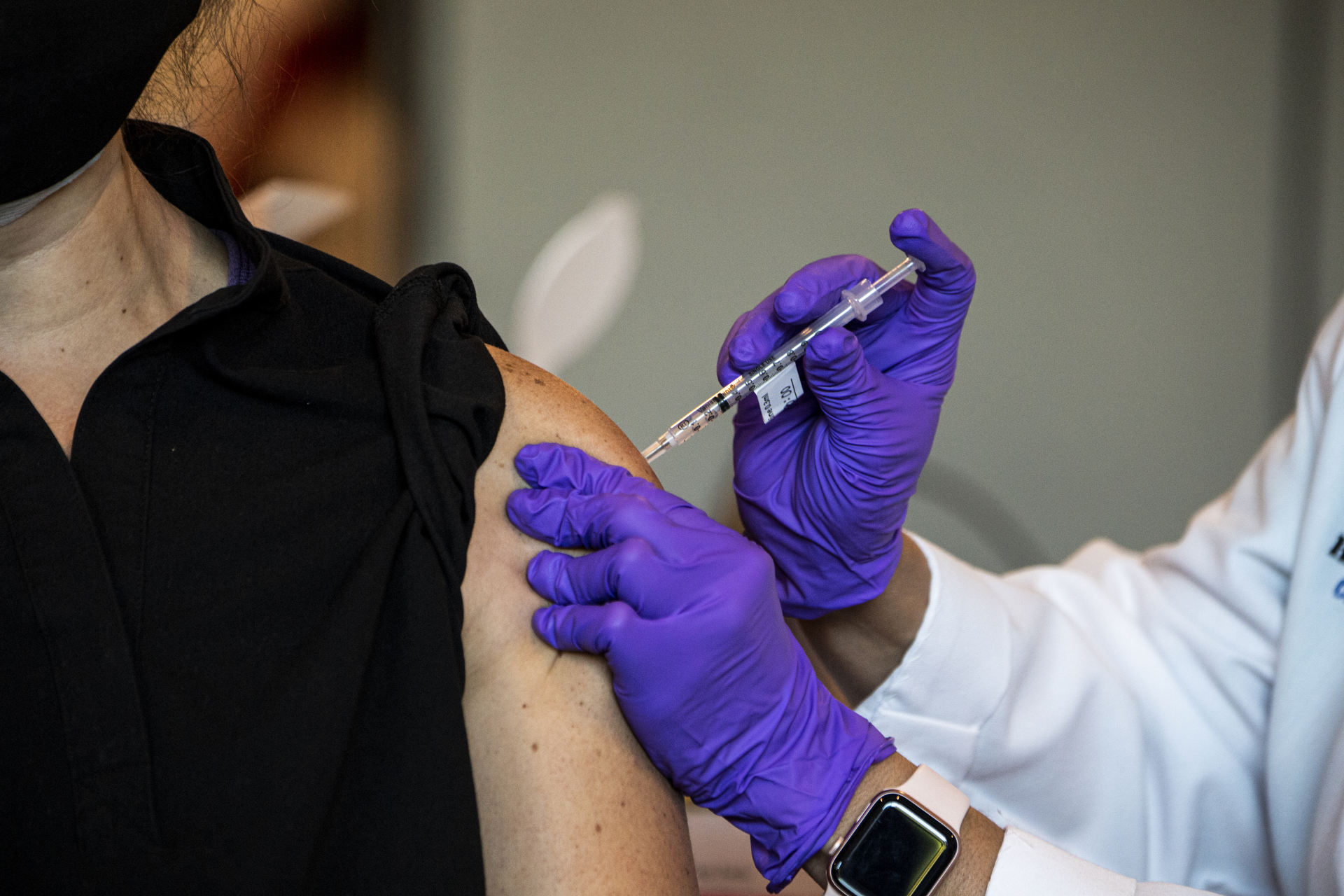 A medic receives a Pfizer-BioNTech Covid-19 vaccine at Memorial Healthcare System in Miramar, Florida on December 14, 2020

US vaccine injury payouts do not mean immunization is unsafe

Social media posts claim vaccines are not safe, pointing to $4.4 billion paid out by the United States. But US health authorities say testing ensures vaccines are safe and effective, and most government compensation results from settled claims in which it was not concluded the vaccine caused the alleged injury.

“With billions paid out for v@ccine injuries, and with only 1% of v@ccine injuries ever reported, it doesn’t take a genius to work out that v@ccines are neither safe or effective,” claim Facebook posts from November 18, 2020. “If you’re pro v@ccine, not only are you anti-health, you’re also anti-science,” the posts conclude. 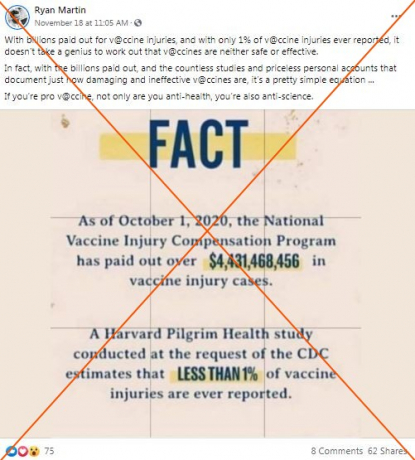 Posts sharing the same image can also be found on Instagram, including from the account @theyspeaktruth, a page selling essential oils. 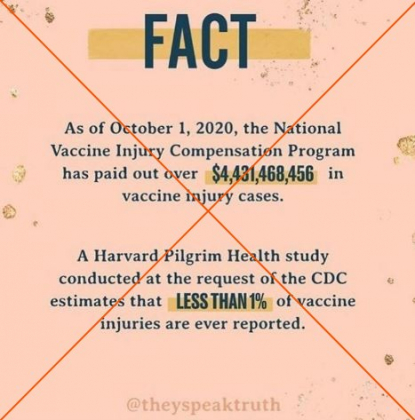 Contacted about the claims in the posts, the US Health Resources and Services Administration’s (HRSA) Division of Injury Compensation, which oversees the VICP, told AFP via email: “The United States has the safest, most effective vaccine supply in history. Most people who get vaccines have no serious problems.”

As the below video from the US Centers for Disease Control and Prevention (CDC) shows, vaccine safety is carefully tested via clinical trials, monitored throughout the manufacturing process and reviewed after the vaccine is widely distributed in the community.

In the 1980s, a series of lawsuits alleging vaccine-related injury led to a decrease in the number of vaccine manufacturers, resulting in rising vaccine costs.

To help ensure a stable and affordable vaccine supply, Congress passed the National Childhood Vaccine Injury Act of 1986. It led to the establishment of the VICP in 1988 as an alternative to the traditional tort system.

Only vaccines and injuries included in the Vaccine Injury Table -- typically those recommended for routine administration to children or pregnant women -- are covered by the VICP. The program is funded by an excise tax of $0.75 added to the cost of each vaccine dose.

In the rare case that a vaccine causes a serious problem, such as a severe allergic reaction, the VICP, rather than the manufacturer, may provide financial compensation to the injured individual.

The HRSA Division of Injury Compensation emphasized that “being awarded compensation for a petition does not necessarily mean that the vaccine caused the alleged injury.”

It explained that as much as 70 percent of the compensation paid by the VICP is the result of a settlement where the program “has not concluded, based upon review of the evidence, that the alleged vaccine(s) caused the alleged injury.”

The posts are correct that the VICP has paid out approximately $4.4 billion in compensation, but Dorit Rubinstein Reiss, professor of law at UC Hastings College of the Law, said: “Focusing on the number, rather than the rate of compensation, when it's a 30-year-old number, when it's a number that covers relatively few cases of harm, is misleading.”

The $4.4 billion also includes around $340 million in lawyers’ fees. The VICP pays attorneys’ fees whether or not the case is awarded compensation.

However, she also said paying lawyer’s fees is the “right thing to do” even if there may be some who abuse the program: “I think it is an ethical duty of society to compensate the rare cases of vaccine harm. And to get compensated, they need representation. By covering the cost, we're helping people get representation.”

According to HRSA, from 2006-2018, 3.7 billion doses of vaccines covered by the VICP were distributed in the US. During that same time period 5,297 petitions were compensated by the VICP.

“This means for every one million doses of vaccine that were distributed, approximately one individual was compensated,” the HRSA explained.

The posts also reference a study by Harvard Pilgrim Health. The study, “Electronic Support for Public Health–Vaccine Adverse Event Reporting System,” covered the period from December 1, 2007 to September 30, 2010 -- more than 10 years ago -- and it did find that “fewer than one percent of vaccine adverse events are reported.”

The study said that the Vaccine Adverse Event Reporting System (VAERS), a program co-managed by the CDC and the Food and Drug Administration (FDA), needed improvement.

The CDC’s Immunization Safety Office said via email: “VAERS is national in scope and can quickly provide an early warning of a safety concern with a vaccine.”

The program compiles reports of “adverse effects” or any health problem after vaccination from vaccine manufacturers, physicians who are required by law to report any adverse event listed in the Table of Reportable Events Following Vaccination, and from members of the public.

The data is publicly available and can be searched here.

The Immunization Safety Office said: “One potential explanation for low reporting of mild events might be that many are expected, and therefore people don’t feel the need to report them. As an example, sore arms are an expected event after certain vaccines so people may decide not to report this event to VAERS.”

It also pointed to a 2020 study that found “VAERS sensitivity for capturing anaphylaxis after seven different vaccines ranged from 13 to 76 percent.”

In addition to VAERS, vaccine safety is also monitored by the Vaccine Safety Datalink, the Clinical Immunization Safety Assessment, and Post-Licensure Immunization Safety Monitoring (PRISM), a partnership between the FDA’s Center for Biologics Evaluation and Research and leading health insurance companies with access to health information on over 190 million people.

There are also programs for members of the military and populations served by Indian Health Services to report adverse events.

As the US begins to administer the Covid-19 vaccine, the CDC said it is expanding safety monitoring by encouraging people to use v-safe, “a smartphone-based tool that uses text messaging and web surveys” to check-in after receipt of the vaccine.

Jennifer Zavolinsky, director of outreach for the non-profit organization Vaccinate Your Family, said via email: “It is completely understandable for people to have questions about vaccines, but they need to know that there is so much misinformation about vaccines.”

She encouraged parents to seek science-based information and to trust that “vaccines are one of the most thoroughly tested medical products available in the US.”