Multiple posts shared thousands of times on Facebook claim that the social media giant's CEO Mark Zuckerberg has announced it will shut down its Messenger service. The claim is false: as of December 16, 2020, there is no record of Zuckerberg making any such public announcement; Facebook has said the Messenger app will not shut down. 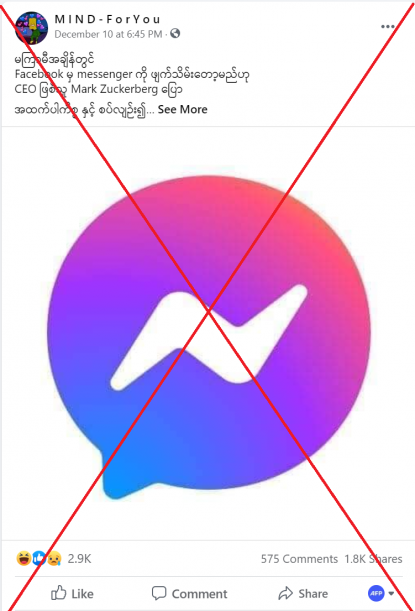 The title of the Burmese-language post translates to English as: “Messenger will be shut down soon, Facebook’s CEO Mark Zuckerberg says”.

The post’s lengthy caption translates in part as: “During this COVID-19 pandemic, Messenger is increasingly being used by couples, especially for video chatting. They are also sharing screenshots of their video chats across Facebook. Zuckerberg said it is kind of disregarding the global catastrophe, and troubling people around the world. Therefore, as the ‘World Single Association’ requested, Messenger will be shut down soon”.

A search of Zuckerberg’s Facebook account and of Facebook’s press releases found that the company’s CEO had made no such pronouncement.

A Facebook spokesperson told AFP that Messenger would not be shut down.

“With over a billion users around the world, Messenger aims be a universal way to connect and be closer together. Beyond connecting with friends, it has also become a thriving channel for brands, developers and consumers to connect with each other and the things they love and the team is committed to ensuring a safe, private and secure place to connect with the people who matter. This commitment remains unchanged.”, a Facebook spokesperson told AFP by email on December 14, 2020.