A purported image of General Apirat Kongsompong, former Commander-in-Chief of the Royal Thai Army and a controversial public figure in Thailand, shaking hands with the chief of staff of the U.S. Army has been shared hundreds of times on Facebook and Twitter alongside a claim that it shows Gen Apirat in a uniform covered by multiple medals. The claim is false; the image has been doctored to include more medals on Gen Apirat’s uniform. 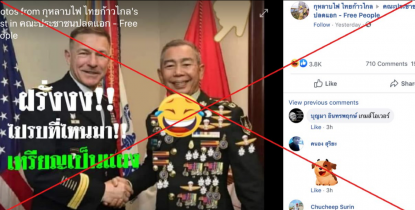 The Thai-language text overlaying the image reads in English as:

“The foreigner is confused!! Where did he go to wars!! so many pins.”

The laughing emoji was added to the image, with another hand emoji pointing towards Gen Apirat.

Gen Apirat served as the Commander-in-chief of Thailand’s Royal Thai Army between 2018-2020. After his retirement in September 2020, he was appointed as a Palace Deputy Secretary, according to this statement published by the Royal Thai Gazette on September 30, 2020.

According to Thai PBS World, he had expressed strong political views against political figures whom he accused of attempting to destabilize the country prior to his retirement.

During an oath-swearing ceremony,  he vowed to only support a government loyal to the monarchy, as Khaosod English reported on March 7, 2019.

Many social media users comments indicated that they believe the purported image is genuine, posting comment such as "Like a crazy man LOL, I feel embarrassed for the foreigner. LOL" and “You power crazy.”

Below are the screenshots of the comments:

The claim is false; the image has been digitally manipulated. 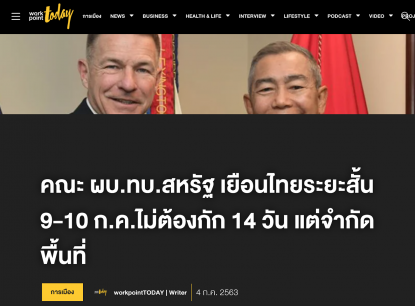 The Thai-language headline translates to English as: “The US Army chiefs will visit Thailand for a short-term period between July 9-10 without quarantine, but they only be travelled within restricted areas.”

Below is a screenshot comparison of the image in misleading Facebook post (L) and on Workpoint Today article with differences circled by AFP (R): 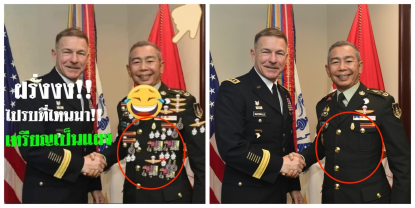 The tweet reads: “It was an honor hosting the Commander-in-Chief of the Royal Thai Army, Gen. Apirat Kongsompong, in the NCR yesterday. Thailand is a critical ally in the #IndoPacifc. Exercises like #CobraGold further strengthen our combined capability that promotes regional security & stability.”

It was an honor hosting the Commander-in-Chief of the Royal Thai Army, Gen. Apirat Kongsompong, in the NCR yesterday. Thailand is a critical ally in the #IndoPacifc. Exercises like #CobraGold further strengthen our combined capability that promotes regional security & stability. pic.twitter.com/Bn2qQwbYzw