Skip to main content
Army soldiers ride past a mural during a government-imposed nationwide lockdown as a preventive measure against the COVID-19 coronavirus, in Colombo on April 3, 2020. (AFP / Ishara S. Kodikara)

Multiple Facebook posts shared repeatedly in December 2020 claim the Sri Lankan government raised the eligibility age for motorcycle licenses from 17 to 25. The claim, which states the new policy will come into effect from January 1, 2021, circulated online one day after two young children were killed in a motorcycle accident in a Colombo suburb. Police arrested a 20-year-old man following the accident. The claim in the posts is false; Sri Lanka's Department of Motor Traffic told AFP on December 11, 2020 that no such amendment had been made.

This Facebook post published on December 6, 2020 claims the minimum age to apply for a motorcycle license in Sri Lanka has been increased to 25 years old.

The post’s Sinhala-language caption translates to English as: “Hope you are happy

"A moment's silence for those who are unable to obtain their licenses”. 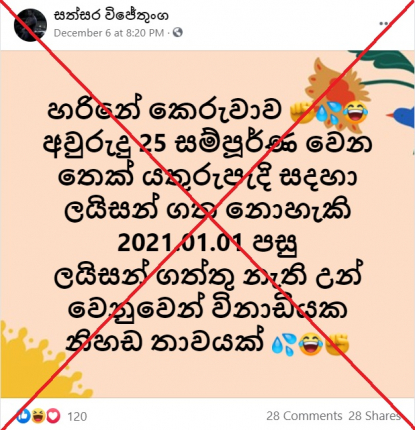 A similar claim circulated on Facebook here, here and here.

Comments from some Facebook users indicated they interpreted the posts as a joke, but comments from other users suggested they were misled by the claim. One comment reads: “This is not a fair punishment. These losers must be hanged to death.”

Another comment reads: “This is just a stupid move”

The claim, however, is false; the Department of Motor Traffic (DMT) in Sri Lanka said no such amendment had been made.

“There is no truth to that claim. No such amendment to the minimum eligibility age has been made,” a DMT spokesperson told AFP by phone on December 11, 2020.

According to DMT’s official website, the minimum age for obtaining a driver's license remains 17 years old as of December 15, 2020.

Below is a screenshot of the DMT web page: 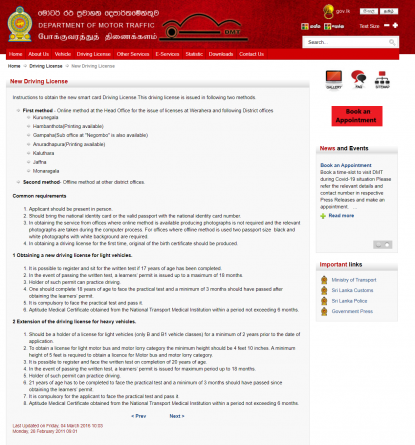